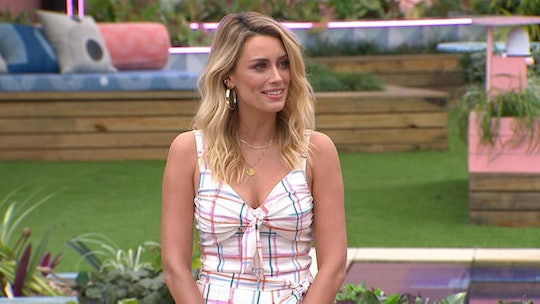 CBS's Love Island sticks a bunch of singles in a villa in Fiji and turns the cameras on them to see what magic unfolds. But audiences are not left to their own devices to navigate the ensuing romantic drama. Host Arielle Vandenberg is there to keep things moving along smoothly. But what does Arielle get up to when she's not turning up at the villa to shake things up? Checking out Love Island's Arielle's Instagram gives viewers a look at the host's life during her off time.

Arielle is a comedian and actress whom you might have seen on Greek or Meet the Browns, though Women's Health reported that her Vines made quite an impact back in the day, too. She also hosted a weekly Snapchat interview series called Snap Hangs, per People, so she's well-versed in the world of social media. And she's pretty busy on Instagram, keeping a steady flow of content going in the form of posts and stories on a daily basis. She has 3,103 posts in total, which is a fairly impressive number that her 1.2 million followers probably appreciate when they're scrolling through their feeds and in need of amusement.

Arielle's Instagram account has a mix of Love Island promo (with suitably comedic captions) and glimpses into her regular life — including vacations, pet pics, and throwbacks.

Arielle's sense of humor is evident in how she captions her posts. Alongside a video compilation of herself walking into the villa, scored with Ariana Grande's "God Is A Woman," among other songs, she wrote, "Walking into a restaurant where I know my ex is on a date..." Next to another photo of her in full host regalia, she proclaimed that "Fiji Barbie" was back to "break up some couples" on Love Island. She often calls herself Fiji Barbie in her weekly show reminders, sometimes even mimicking Barbie's telltale non-articulated poses.

But when she's not in host mode, Arielle is usually spending time with her boyfriend Matt Cutshall. He's all over her Insta stories and in a recent post, she praised him as "the most supportive cutie." She considered herself lucky to be able to spend so much time with him, because it seems he's accompanied her to Fiji while she films the show. "I'm so grateful for him everyday, even if he does wears aqua socks [sic]," she wrote.

Before Love Island took over Arielle's feed, she posted short humorous videos (shades of her Vine days) and photos of her very cute, very small dog Stinky. Stinky also has his or her own Instagram account, for anyone interested in having even more pets to follow. Arielle has shared photos from her sister's wedding, as well as throwbacks to her childhood. She documented a brief foray into pink hair, too, so she pretty much hit Instagram bingo.

At the moment, Love Island is dominating Arielle's Instagram account, which is to be expected. Once the season concludes and her hosting duties can take a break, fans might see a return to doggos and Vine nostalgia. But until then, it looks like it's all beaches all the time.