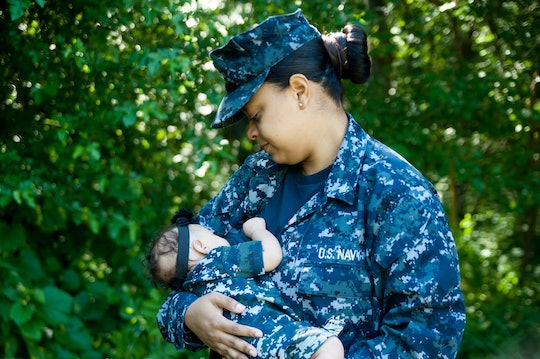 Meet The Kickass Women Who Breastfeed While Serving Our Country

A photo of a breastfeeding mother on the cover of Time magazine or a mom taking time to pump at work is rather accepted these days. And for those who still cringe, well, you can go ahead and get over it. But a picture of a mom pumping in the middle of the desert? That’s not exactly commonplace. Unless you’re Navy veteran Robyn Roche-Paull who, as the founder of Breastfeeding in Combat Boots (BFinCB), counts those photos of military moms breastfeeding their happy, smiling babies as the most rewarding aspect of running the non-profit organization.

“I love the stories and photos that moms send me with a simple ‘thank you for helping me to be successful’,” she tells Romper. “Or when I speak at a military installation and the moms come up to me and give me a hug and tell me that without BFinCB they wouldn’t have been successful.”

Helping other women in their breastfeeding journeys is especially gratifying because it wasn’t the case when Roche-Paull embarked on her own. While serving in the United States Navy in the '90s, Roche-Paull says there were no policies regarding breastfeeding, no deferments from deployment, and maternity leave was only six weeks long.

“I struggled to get breastfeeding off to a good start with bouts of mastitis and thrush, only to finally get back to work and have no time or place to pump,” she says. “I was an aircraft mechanic and was one of about 10 women in a squadron of over 500 men.”

Roche-Paull says her female supervisor told her to just feed her son formula and quit breastfeeding because it was "making all the women look bad with me asking for time to pump every three to four hours.”

When she was able to pump, Roche-Paull says she had to do so in a bathroom or a dirty supply closet that didn’t lock. “I worked around hazardous materials like jet fuel and no one could tell me if it was safe for my pumped milk that I was feeding my baby,” she says. “There were no books on this subject, and no one to talk to about the questions and struggles I was facing.”

Despite the odds, Roche-Paull successfully pumped for her son for a year while working in the Navy, an accomplishment that she says was achieved through “sheer determination.” But while her enlistment ended in 1997, her feelings for the lack of resources and support didn’t. Roche-Paull went back to school to become a lactation consultant. It was there that she created a booklet with tips and tricks to successfully breastfeed while in the military, leading to the publication of her first book, Breastfeeding In Combat Boots.

During the writing process, Roche-Paull created a Facebook page to get stories from other mothers who were currently serving in the armed forces, and it took off.

“The page was way more successful than I ever dreamed, which in turn made me realize that I could have a website with all this information freely available to the public,” she says. Thus, the website for BFinCB was created, eventually leading to its establishment as a non-profit organization. “The growth has been exponential,” Roche-Paull, who is now an International Board Certified Lactation Consultant (IBCLC), tells Romper in an email interview.

They face some pretty incredible odds to make breastfeeding work, like field exercises, time at the range shooting weapons, driving a Humvee, flying a helicopter or jet, or going out to sea for weeks or months at a time.

Today, the BFinCB Facebook Page has nearly 17,000 members, and large followings on Instagram and Twitter. Roche-Paull says the website sees thousands of visitors every day, with many downloading the free handouts on the program. “I am very busy aside from my regular job at the local military hospital (where I am a lactation consultant), whether it’s running the website, answering emails, filling orders (for books, water bottles, and t-shirts), or monitoring the social media channels,” she says. “It’s a little crazy, but worth it to provide that much needed support.”

According to the Veterans Health Administration, women represent the fastest growing population group in the military. Women comprise 14.5 percent (about 200,000) of active duty personnel (74,000 in the Army, 53,000 in the Navy, 62,000 in the Air Force and 14,000 in the Marine Corps). Roche-Paull says about 22 percent of those women have children under two years old.

“They face some pretty incredible odds to make breastfeeding work, like field exercises, time at the range shooting weapons, driving a Humvee, flying a helicopter or jet, or going out to sea for weeks or months at a time,” Roche-Paull says. “Being successful with breastfeeding is a challenge. They have to overcome not only cultural issues, but finding time and place to pump, how to ship milk home from overseas, travel, deployments, and possibly exposure to hazardous materials, not to mention maintaining weight and physical fitness standards.”

Amy, an Active Duty Army Officer (Major), says Breastfeeding in Combat Boots helped her to accomplish one year of breastfeeding by giving her the knowledge and support to breastfeed her son.

“I’m a first-time mom and it was definitely a challenge to have the courage and determination to breastfeed my son and continue pumping while active duty,” she tells Romper. “A lot of my coworkers were unsupportive, but I pushed through, and a lot of it was knowing I’d help inspire other women who follow [BFinCB].”

Crystal, also an Active Duty Army Officer (Major), is currently stationed in Japan and breastfeeding her 14-month-old son. “My older daughter is 13 years old and I quit breastfeeding when I returned from convalescent leave after six weeks because a support system like Breastfeeding in Combat Boots wasn't available at that time,” she explains to Romper. “I didn't know how I would get through a work day and pump.”

These are moms who have decided that serving their country — a sacrifice in itself — is very important, but so is making sure that their babies receive their breast milk even if that means shipping their milk home from Afghanistan.

But Roche-Paull says there is still a misconception that breastfeeding isn’t achievable while serving in the military. “I hear it every day from the moms who attend prenatal breastfeeding classes at the hospital to the friends and family at a bedside telling her to just give a bottle because ‘You know when you go back to work you won’t be able to continue breastfeeding,” she says. “[Not to mention] supervisors who don’t think they can afford to give moms two to three 15-minute breaks during the day and have no idea where to make a lactation room. Trying to overcome that attitude and provide information and support is vital.”

That’s achieved, Roche-Paull says, by sharing stories like those from Amy and Crystal, and providing evidence-based information on the BFinCB website. She also partnered with Mom2Mom Global to further that initiative, and emphasizes the importance of resources like Miss Military Mom, which features military-compliant nursing and pumping shirts to wear under a uniform.

“These are moms who have decided that serving their country — a sacrifice in itself — is very important, but so is making sure that their babies receive their breast milk even if that means shipping their milk home from Afghanistan for six months,” Roche-Paull says. “So, yes, moms in the military are special.”

And to that we salute you, mamas, and thank you (a million times over) for your service.