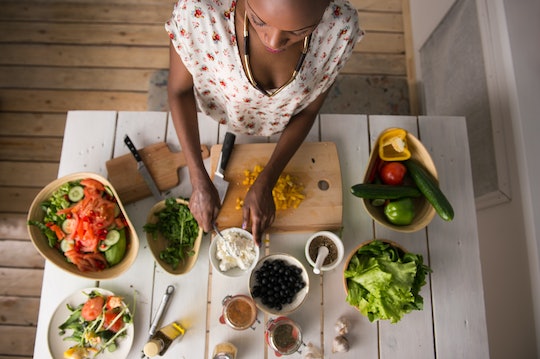 Your Low-Fat Diet Could Be Killing You, According To A Major Study

Is everything I've heard about maintaining a healthy diet a lie? A new study recently found that low-fat diets could increase the risk of early death, contradicting just about everything else I've ever heard or read about healthy eating. The study found that consuming high levels of all fats actually cut mortality by up to 23 percent, which is definitely not an insignificant number. But does that mean it's time to revise the grocery list? Not so much.

The latest research was presented at the European Society of Cardiology Congress, and it found that people with a low intake of saturated fat had a 13 percent increased risk of early death, as compared to those eating more of the fats. So even though a high-fat diet can lead to weight gain, according to WebMD, this new evidence suggests that it can also apparently lead to a longer life.

That doesn't seem fair at all, especially considering that popular thinking over the last several decades has suggested that eating foods high in fat is bad. But while it may be time to rethink some of these beliefs, it turns out the findings of this latest study aren't as simple as fat equals good and low-fat equals bad.

The study, published in the Lancet, found that people who cut down on fats often turn to eating too many "stodgy," heavy-carbohydrate foods — like bread, pasta and rice — instead. That means they often miss out on important nutrients, according to The Telegraph and experts involved in the study.

Participants who ate the highest levels of carbohydrates — in particular, refined sugars in things like processed meals — actually faced a 28 percent higher risk of early death. Generally, the "stodgy" foods listed above can fall into the carb category.

The study involved 135,000 people from 18 different countries, according to TIME, so these findings are not isolated to a small sample size. From those numbers, experts discovered that the average diet was made up of 61 percent carbohydrates, 23 percent fat, and 15 percent protein. More than half of the people in the study consumed high-carbohydrate diets, according to TIME, and in some areas — like south Asia and Africa — the amount of carbohydrates in the average diet was even higher.

So, it appears that carbs are the true culprit for a higher risk of early death — not fat in general or the absence of it. Mahshid Dehghan, a nutrition epidemiologist at McMaster University, said, according to the CBC:

When you recommend lowering fat, by default, people increase their carbohydrate consumption. And increasing consumption of carbohydrates results in higher risk of mortality.

And researcher Dr. Andrew Mente, also from McMaster University, agreed that we need to rethink our limits when it comes to fats and carbs. Mente said, according to The Telegraph:

Our data suggests that low fat diets put populations at increased risk for cardiovascular disease. Loosening the restriction on total fat and saturated fat and imposing limits on carbohydrates when high to reduce intake to moderate levels would be optimal.

So if you're a mom who enjoys the occasional avocado toast in place of a sugary breakfast, just know that you still have to watch out for a high-carb replacement. And if you have any concerns about your diet or overall health, it's always best to talk to your doctor.