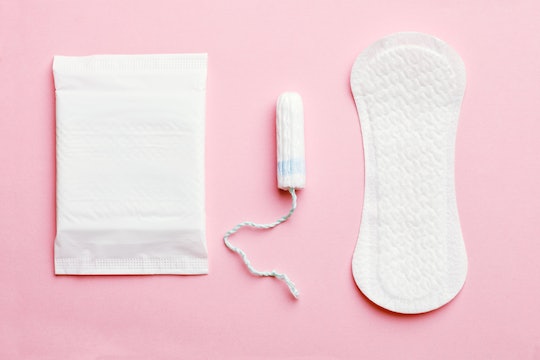 Low-Income Women May Struggle To Access Period Products, According To New Study

Most people who get periods know they can sometimes be a struggle, and there's nothing worse than your period arriving when you aren't prepared with a tampon, pad, or other product that can help. But, for some people, that feeling of being unprepared is constant. According to a new study, low-income women might struggle to access period products. And while the conversation surrounding affordability of and access to menstrual hygiene products often centers on people in other countries, this research suggests that it might be a problem for people in the United States as well. This study helps shine a light on people whose experiences aren't always included in discussions around menstrual hygiene.

Most girls start their periods around 12 years old, as Kids Health noted, but anywhere between 10 and 15 is typically normal, too. When you start or have your period, keeping up with menstrual hygiene becomes extremely important. It includes not just having access to products you may need throughout your period, such as pads and tampons, but also having the ability to keep yourself clean and change those products regularly.

In a new study, conducted by researchers from Saint Louis University and Washington University in St. Louis, is due to be published in the February issue of Obstetrics & Gynecology, researchers decided to look into the menstrual hygiene needs of low-income women.

Reachers surveyed 183 women ages 18 to 69 between July 2017 and March 2018, as reported by Eurek!Alert. According to the outlet, they primarily experienced their first period between the ages of 12 and 13, and then spent many years dealing with period product insecurity.

The study's abstracted noted that researchers found that 64 percent of the women included in the study reported that they couldn't afford things like pads or tampons at some point over the course of the previous year. However, according to the study's abstract, 21 percent of women lacked access to supplies on a monthly basis.

Beyond that, the study noted 46 percent of women surveyed reported that they couldn't afford to buy both food and period-related products during the past year. This means, for some women, they had to choose between food or menstrual products.

The women themselves noted that one big challenge in accessing period products is that they cost a lot and they can't use any government benefits for which they qualify under the Women, Infants, and Children Program (WIC) or Supplemental Nutrition Assistance Program (SNAP) to help with purchasing them, as reported by Eurek!Alert.

In addition, most tampons and pads in the United States are subject to sales tax, because they're considered non-essential, as HuffPost reported. Only a few states have abolished the so-called "tampon tax", so it remains a pressing issue.

Dr. Anne Sebert Kuhlman, PhD, MPH, an associate professor of behavioral science and health education at Saint Louis University's College for Public Health and Social Justice, who led the study, wrote, with her co-authors, according to Eurek!Alert:

Adequate menstrual hygiene management is not a luxury. It is a basic need for all women and should be regarded as a basic woman's right. Our failure to meet these biological needs for all women in the United States is an affront to their dignity and barrier to their full participation in the social and economic life of our country.

When people cannot afford access to proper hygiene products, they're forced to make substitutions. Those may be rags, cloths, paper towels, or even children's diapers (because more programs give those away), as reported by Reuters.

If you're able, consider reaching out to organizations that work with low-income women in your community to donate menstrual hygiene products, which will help alleviate a tiny bit of the burden. But overall, this issue will only really be solved by health care providers, politicians, and society in general recognizing the necessity of these products, and instituting some major policy change.