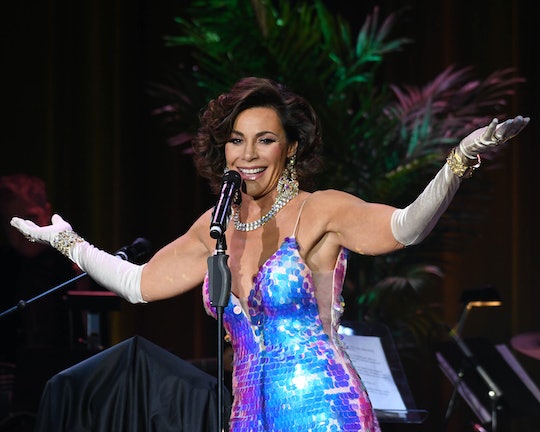 The Countess Has A Very Important Message For Women Everywhere

The room is pulsing with excitement. As the lights go down and the stage lights up, it’s clear the audience — a sea of animal prints and sequins — is filled with Real Housewives fans. They immediately jump to their feet when they hear her voice. The screams of excitement are likely shattering glass at the bar behind the mezzanine. And it’s all for Countess Luann de Lesseps, who calls herself “the Countess,” and graces the stage in a floor-length Jovani gown (of course). It’s been a long time since I’ve seen One Direction live, but it’s the only thing that comes to mind as I watch the audience around me spark with an energy unlike any other. The “Countess and Friends” cabaret show is the modern woman’s One Direction. (That’s a compliment.)

The road to starring in her very own cabaret show has been long, to say the least. In another, pre-Real Housewives of New York life, de Lesseps worked as a licensed practical nurse in Connecticut, where she was born and raised, according to Us Weekly. When nursing didn’t cut it, de Lesseps moved to New York City to pursue a modelling career full-time and, as Buzzfeed reported, even covered Playgirl in 1990. In 1993, de Lesseps entered into a 16-year marriage with Count Alexandre de Lesseps — an actual French aristocrat, and the reason she’s known as “the Countess.” Despite being one of the original Real Housewives of New York City, this nutshell version of her life shows she was never really a “housewife” at all. But, more on that later.

On the far side of two (now adult) children, two divorces, and 11 seasons of Real Housewives, a thousand people are dancing and singing along free of dissonance as de Lesseps belts out “Money Can’t Buy You Class.” If a subtheme on RHONY was life after kids, de Lesseps is determined to show that she has had many.

This specific show is important to the Countess and her fans for a very significant reason: it’s her grandiose return to The Borgata in Atlantic City, where she filmed the (nothing short of) iconic music video for “Chic C'est La Vie” in 2011. A few snippets of the music video remind the screaming audience that absolutely nothing has changed: the Countess is still, for lack of a better word, chic AF. The bedazzled diary (from which she reads "excerpts" from specific days in her life, which then lead her into song) and several glamorous gown changes only further prove this.

On stage, the Countess (known on SuperJeweler by her alternate royal title, ~Luann de Lesseps of the Real Housewives of New York~) is energetic and engaging, but when I visit her backstage for an interview after the show she is more subdued. For starters, she has swapped out the vivacious blue gown she chose to close the show in for a sparkling jumpsuit she wore earlier. There are several fresh floral arrangements throughout the large dressing room — from whom? we’ll never know — as well as endless fresh fruit and bottled water to keep the Countess well fed and hydrated.

My passion happens to be doing this show. Bethany's passion was margaritas, you know?

The best part? After performing for two hours straight, the Countess is still, somehow, eager to chat with me. As I sit in the matching accent chair across from her, I compliment her on her statement necklace (from the Countess Luann Collection by SuperJeweler, of course). Her response, which was nothing short of genuine: “This piece would look great on you.” I quickly retort that if she didn’t want the piece I would happily take it off of her hands, to which she laughs. I’m only half disappointed when she doesn’t actually give me the necklace. It’s OK — money can’t buy you class anyway.

“I call it cabaret for every day because it’s statement necklaces that just change up your look and take you from day to night,” de Lesseps tells me as we further discuss the collection. “It’s very wearable, it’s affordable, it’s well done. You know, it’s quality for the price point.”

But for the Countess, her collection is not just about the bling. As she goes on explaining the designs to me, she adds: “It’s different looking than what’s out there. It’s kind of got an American Indian thing going, because that’s my background.” In 2010, de Lesseps told The Star in an interview that her father was a full-blooded member of the Micmac tribe. Later in our conversation she describes the line as “Indian going cabaret.”

Throughout the show and our conversation, what strikes me most about the Countess is that she — nor any of the notable Real Housewives — are not, actually, housewives. According to Dictionary.com, the definition of a “housewife” is “a married woman who manages her own household, especially as her principal occupation.” It is worth noting that the definition is preceded by a warning in italics: “sometimes offensive.”

While I, personally, do not find anything wrong with a woman choosing to be a housewife, it’s worth addressing the fact that the Countess isn’t one. She is not at home putting dinner on the table every night between several loads of laundry and packing her husband’s lunch for work. The Countess is a businesswoman, as are most of the notable Housewives. I acknowledge this to de Lesseps.

There is a brief pause.

As we say our goodbyes and I leave the Countess with her small but polite and professional team, she is now only concerned with one thing: her fan meet and greet. “They’re waiting for me,” I hear her tell someone eagerly before I’m completely out of earshot. Sure enough, as I exit the backstage area and head back into the venue to make my exit, dozens of people are buzzing from watching the door open — and then immediately disappointed to see me, absolutely no one in comparison to the Countess, with zero French aristocratic titles to speak of, walk out. I can’t blame them.

It takes less than five minutes or so for the Countess to descend through the very same door I did. This time the buzzing excitement matures into cheers as the Countess waves hello and begins greeting her fans with the conviction that this is where she belongs; this is her real home.

“Countess and Friends” has tour dates scheduled throughout November 2019, and tickets are available at CountessLuann.com.