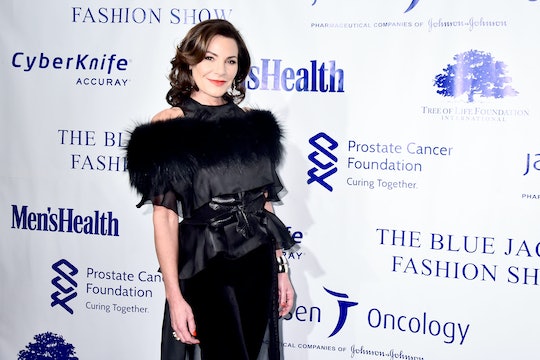 When Bethenny Frankel screamed at Luann de Lesseps that life was not a cabaret in the Real Housewives of New York Season 11 trailer, she spoke not only for herself and the rest of the Wives, but for everyone in the viewing audience. Luann on RHONY is obsessed with her cabaret, but that's not the real issue. The problem is that she's so myopic that she can't spare a thought for anybody else.

Look, it's a good thing that Luann has found something that makes her happy. Everyone should have that! But Luann has a habit of zeroing in on something new to the exclusion of everything else in her life, then getting angry at her friends when they try to point it out. First she was so invested in her Countess brand that she became a quasi etiquette coach-slash-pop star, then she fixated on Tom despite the red flags. Now she's like one of those dolls that talks when you pull a string, though the only thing she says is the word "cabaret" over and over again.

But I don't think the other Wives would be as fed up with Luann if she was just overenthusiastic about her new hobby. I think cabaret is just the flashy sequined facade over a whole other bag of worms.

Take, for instance, "Caught Between an Ex and a Hard Place." The episode picked up with Sonja's drunken flop next to the table, where she narrowly missed cracking her head against its edge. Paramedics were called and Sonja was tended to, with Bethenny and Barbara particularly concerned that she may have badly hurt herself. Luann stayed away in her room the whole time, and the next morning she was more concerned that no one cared about how she felt. I'm sure they did care, but there was also the pressing matter of Sonja's potential head injury.

Yes, Sonja was fine, but she very easily could have been hurt. Luann only seemed to care about herself. She insisted the other women were angry that she was successful and looking to tear her down. Despite the fact that they had shown up again and again for her performances even when she didn't. Despite the fact that Bethenny appears to have really been there for Luann when she decided to go to rehab. Luann is taking their genuine concerns and deflecting them while turning herself into the injured party in the process.

No one is denying that each and every Housewife can be a little insensitive and self-absorbed from time to time; after the vistas and gowns, that's what we're all watching for, really. Hearing Luann go on about cabaret like she's been possessed by the spirit of Sally Bowles is definitely annoying. But if she was doing that while still being interested in her friends and concerned about what they were dealing with, no one would care. Luann has to take care of herself, but she also has to start thinking about someone besides herself. Right now, she's just throwing glitter at the real issue.