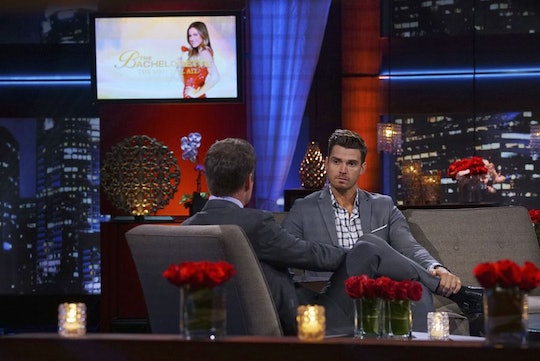 It is unusual for the next Bachelor star to be announced before Bachelor in Paradise wraps its season, but this time things were different. For one of the first times, the identity of the next Bachelor was truly a mystery. It could have been anyone; even Bachelor spoiler King Reality Steve got it wrong. Twitter clues — yes, the 2017 Bachelor was hinted at with Twitter clues — pointed to Luke Pell, the man who placed fourth during JoJo Fletcher's season of The Bachelorette. But, as fans of the show know (or really, anyone who went on social media Tuesday night knows), Luke was not the announced Bachelor. Instead, Nick Viall, the man who came in second place twice on the Bachelorette, was announced as the leading man come January.

It was surprising and not surprising, which is how Luke felt about the whole situation. "I was aware that the show thrives off of unexpected twists and turns in any way they can create the most dramatic scenario, the most dramatic episode, or the most dramatic season," he tells Romper in an interview. "I always knew that there was a chance that changes could happen at any time regarding casting and regarding situations on and off camera."

As someone who considers themselves pretty looped-in to Bachelor Nation (I co-host a podcast about it, after all), even I was surprised. Mike Fleiss, the creator of the show, spent the better half of Tuesday teasing the big announcement. This came after a few weeks of "clues" being sent out to Bachelor Nation — clues we were supposed to decipher in attempt to figure out who the next Bachelor star would be. Some of them were abstract, while others seemed more obvious. The Luke clues, if you will, seemed to pile up. One of the most concrete "clues" wasn't even on Twitter, it was on TV, for all to see. How could Nick Viall be The Bachelor if he was currently in a relationship with Jen Saviano on Bachelor in Paradise? An early announcement like this would spoil the season finale.

Yoda, a character in the Star Wars series, trains Luke Skywalker against the Galactic Empire.

This wasn't the first snub in Bachelor Nation. In early 2016, reports stated that Caila Quinn was going to be the 2016 Bachelorette star. Us Weekly reported on it originally, stating that while it was only sources that confirmed to the magazine that Caila would be taking on the leading role, she was seen filming her opening package for the show — a strong indicator that the role was hers. But, during After the Final Rose (when Ben Higgins chose Lauren Bushnell over JoJo Fletcher), it was revealed that JoJo was indeed the new Bachelorette. So, what happened to Luke has happened before.

I was asking producers... 'Am I gonna get Caila'd here? Because I know that's what this show thrives off of. And if I'm out front and I'm the public speculation and the probable winner, is there going to be a last minute change?'

"I saw what they did with Caila [Quinn] and Arie [Luyendyk Jr.] in years past," Luke says. "I realized that going into the process, as all of the discussions were happening and meetings were taking place and contacts were being made." He was so aware of it, in fact, that he even says he brought it up to the producers.

"I was asking producers all along the way 'Am I gonna get Caila'd here? Because I know that's what this show thrives off of,'" he says. "'If I'm out front and I'm the public speculation and the probable winner, is there going to be a last minute change?' I literally asked that multiple times throughout the process..." Luke says that he cleared his personal and business calendars through Thanksgiving, "that's the production time," and only found out "hours before" he was supposed to go to Los Angeles, bags packed and all. (ABC did not comment on Luke's claims.)

"I just wanted to know one way or the other, so I could either put my life on hold and continue being committed and involved to this process and finding someone."

The aftermath of the announcement was like going through it all over again. "There was a huge outpour of support from fans who had been expecting it to be me," he admits, even saying he saw the Nick Viall decision rooted in "hype" and "surprise", rather than what people's expectations were. The Twitter reaction to Nick's reveal was enormous, but not everyone was happy. Fans, past Bachelorette contestants, and even Luke's mom spoke out on his snub.

But would he do it again? "I came into the process open, vulnerable, sincere from an emotional standpoint, and ready to give 100 percent of myself to the process," he tells Romper. In his interview with Us Weekly, he says "I probably wouldn’t do [The Bachelor]. I don’t want to wait in the wings for what decisions they can make for my life. I want to head back into taking control of my own destiny.”

ABC chose not to comment on the claims Luke Pell made.