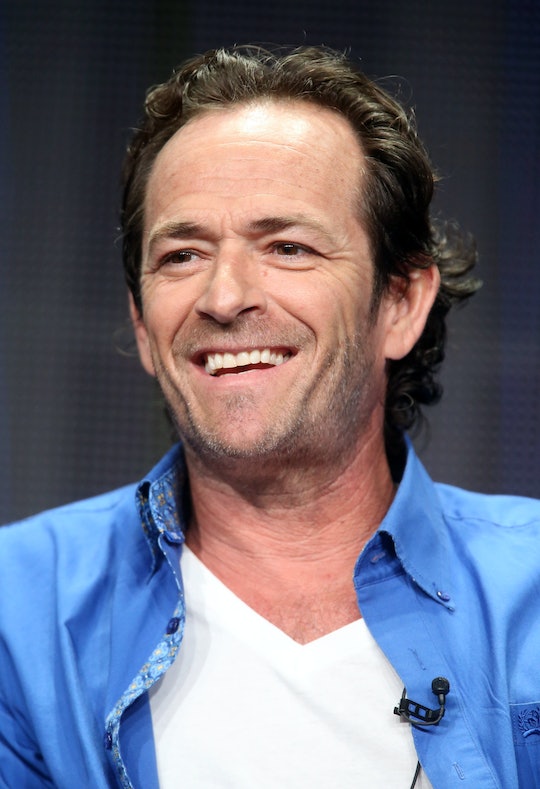 It's a heartbreaking day in Hollywood. On Monday, TMZ and Variety reported that iconic television actor Luke Perry has died at the age of 52. The Beverly Hills, 90210 alum and Riverdale star had recently suffered a "massive" stroke and reportedly passed away on Monday morning at St. Joseph's Hospital in Burbank, California.

The statement continued, "The family appreciates the outpouring of support and prayers that have been extended to Luke from around the world, and respectfully request privacy in this time of great mourning. No further details will be released at this time."

Perry, born in Mansfield, Ohio on Oct. 11, 1966, was a beloved figure in pop culture for decades, first launching into fame with his starring role as Dylan McKay on Beverly Hills, 90210 at the age of 24, according to E! News.

Scores of the actor's fans and fellow celebs took to social media following the heartbreaking news of his passing to share their shock and condolences.

Ryan Seacrest shared in a tweet, "Luke Perry was a great actor and truly one of a kind. Watching him on 90210 was one of the reasons why I wanted to move to LA. Thinking of his family and friends on and off the set. Rest in peace."

Katie Couric wrote on Twitter, "This is so so sad. Luke Perry has died at the age of 52 after suffering a massive stroke. He was surrounded by his children Jack and Sophie, fiancé Wendy, his ex-wife, and his family and friends. Thinking of them all today.#LukePerry."

Actor Seth Green wrote on Twitter that he was "crushed" to hear the news. "Luke Perry was truly a great guy. Warm, kind, generous and hard working. We met very young, I witnessed the grace with which he became a pop icon & parent. He’s been an awesome example of how to stay decent in a swirl of crazy. Love to his family."

Patricia Arquette penned a touching tribute to the late actor: "Luke Perry - Irreplaceable beautiful and kind human being, incredible friend, generous actor and adoring father to Jack and Sophie and loving partner to Madison we are all heartbroken. You are the love and you are the light."

One heartbroken fan wrote that Perry was "part of the history of our youth."

Another fan wrote that she was "speechless" upon hearing the news. "No one could have played bad boy with the biggest heart, Dylan McKay, better than you. Rest In Peace Luke Perry," she tweeted.

This is just a small sampling of the tributes that immediately poured in following Perry's passing. Many shared that they will remember him as Dylan McKay from 90210, while younger generations as well as his current colleagues will miss Perry on Riverdale. The writers on the CW show shared, according to The Hollywood Reporter, "Luke Perry... you were a joyful and vibrant soul. You will be missed but most certainly your legacy will be remembered forever. Rest in love and peace, friend. #Riverdale."

It's evident that Perry's passing has been heartbreaking for many to hear, but that his legacy and memory will forever be remembered.