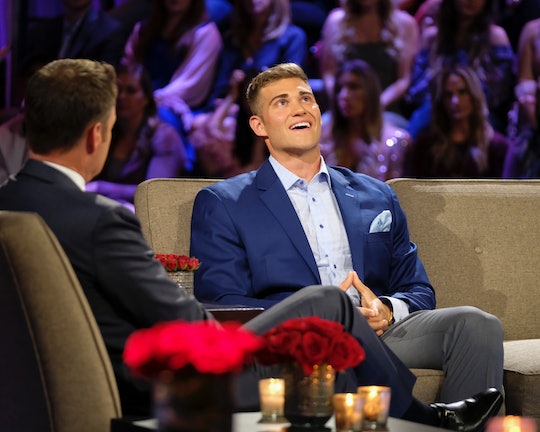 This Might Be The Most Outrageous Thing Luke P. Said At "Men Tell All"

Luke P. has had an intense season on The Bachelorette and he certainly didn't manage to turn things around for himself on the "Men Tell All" special. He fired up the guys so much that Devin actually came out from backstage to — very politely, I might add — observe that Luke seems like the type of guy who wants to control a woman, rather than celebrate her independence. Luke said it's a man's job to guide a woman in response, but denied that he sought to control anyone, at which point all the women in the audience collectively buried their faces in their hands.

It all started when Luke claimed that he felt like he was on a "rescue mission" for Hannah, to save her from the other guys. Chris Harrison dutifully pointed out that Hannah didn't need saving, and tried his best to illustrate how patronizing Luke was being. But Chris obviously wasn't going to get through to him, so Devin came out to give Luke a little talking-to.

"Luke, there are two types of men," Devin started. "There are men that want an independent, strong woman and there are men who want a woman who they can control. I feel, right now, that you are a man who wants to control a woman so that you can feel better about yourself."

Chris gave Luke the chance to rebut, and after an extremely awkward pause, Luke replied:

The last thing that I want and the last thing I'll ever do is control a woman. And I do want an independent woman in my life for my future wife. I want a woman that will make decisions for herself and that won't need me when I'm [not] there. Although a man is supposed to lead and guide a woman in the relationship.

It was such a shocking thing to say that the audience actually broke out into a little bit of nervous laughter after another long silence. During that silence, the camera panned to many, many women in the audience who looked like they wanted to cringe themselves out of existence just for having to hear that. It was brutal, but Luke's time in the hot seat still wasn't over. (Personally, I can't believe he was allowed to continue to speak on network television after that, but alas.)

After the guys came out, Luke asserted that there was a target on his back because of the strength of his and Hannah's connection, but Mike quickly set him straight. Ever the voice of reason, Mike pointed out that Luke's behavior put a target on his back, not his relationship. After all, the rest of the guys managed to get along with the finalists who are still left. Even sweet baby angel Connor S. spoke up, saying, "You're a liar, manipulator, you're controlling, and you honestly are a psychopath. And I think everything you're about to hear tonight you deserve."

Needless to say, there was no moment where Luke ever redeemed himself or made nice with the cast when he got the final word. Rather, they tensely agreed to forgive Luke when his actions and behavior changed. But the good news is, that really, truly is the last Bachelor Nation has to see of him this season.