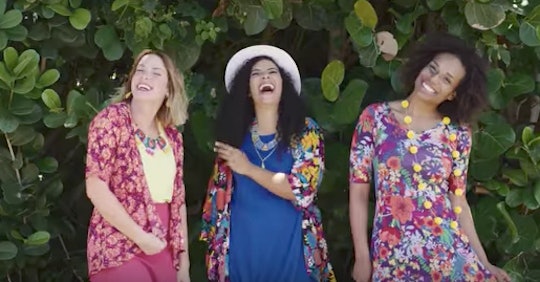 Fall is almost officially here, which means it's almost officially legging season. Although, if I have to be honest, are leggings ever out of season? You might be lusting after leggings in new funky prints to wake up your autumn wardrobe — or perhaps a coveted solid color pair of LuLaRoe leggings, the mythical unicorns of the direct sales world of fashion. LuLaRoe offers more than just leggings, of course, but it's those dubiously soft leggings at the heart of its empire, which boasts more than 80,000 Independent Fashion Retailers, who the company calls its sales consultants. On Friday, LuLaRoe abruptly changed its consultant return policy — and people are rightly furious.

First, for those not in the LuLa know: LuLaRoe is a direct sales enterprise, just like Avon makeup, Jamberry nail wraps, and DoTerra essential oils. In theory, you can't buy LuLaRoe products in stores and you pay a premium for not only the quality of LuLaRoe's goods, but the exclusivity of their styles. LuLaRoe consultants must buy their inventory wholesale from the company — the cheapest onboarding package sets back interested consultants nearly $5,000, according to LuLaRoe's "Becoming a Consultant" guide.

Here's the catch, and it's a pretty big one: LuLaRoe consultants can only order style types and sizes — they can't order LuLaRoe patterns or colors. It's all luck of the draw. Some LuLaRoe patterns don't sell well, so consultants have been able to sell them back to the company for a 100 percent refund — but as of Friday, the 100 percent refund policy is no more. Representatives for LuLaRoe did not immediately return Romper's request for comment. In a statement to Inc., LuLaRoe said that the company "provides a fair and generous path to Independent Fashion Retailers who want to exit the business. We are simply reiterating a long-term written policy that each Retailer agrees to when he or she signs up."

Many consultants do a mass return of product during what's known as going out of business sales, or GOOB sales as they're known in LuLa land. Prior to Friday, LuLaRoe consultants could not only return their unsold inventory back for a 100 percent refund, but they didn't have to pay for shipping either. But over the weekend, word spread that the days of 100 percent refunds were over and that returns would be accepted at a 90 percent refund.

Rubbing salt in the wound, LuLaRoe consultants would now be responsible for shipping costs to return their products to boot — and all of this effective is immediately. That's is a pretty big deal, given that it's not like you get a couple of boxes of LuLaRoe inventory to sell — we're talking about massive boxes with potentially hundreds of clothing items within that could cost upwards of $2,000 to ship.

In addition to putting consultants on the hook for 10 percent of their buy-in costs as well as return shipping, LuLaRoe also said it would withhold refunds for any items the company deemed it was unable to resell — which includes any product not returned in its original, sealed packaging with hang tags, or prints that it no longer finds "resalable." These non-resalable items include many of LuLaRoe's holiday-themed prints, as well as any seriously questionable fashion patterns, aka, those that just don't sell.

LuLaRoe consultants are pissed about the changes, especially those who were in the middle of the cancelation process for the company, which is a pretty complicated and lengthy process. Many LuLaRoe consultants have vented their frustrations on the company's Facebook and Twitter accounts, with many claiming that the company won't return their emails or endlessly leaving them on hold when they call.

LuLaRoe touts itself as a way of allowing women, particularly stay-at-home moms, to become their own independent business owners. "Make a full-time income doing part-time work," reads one LuLaRoe motto for the company — but as Quartz noted in a recent piece about multi-level marketing operations, most LuLaRoe consultants end up losing money of their own rather than making a sustainable income.

In its recruitment materials, LuLaRoe says that consultants can expect to make "35 to 60 percent profit" on every item sold, and yet, according to the Federal Trade Commission, less than 1 percent of MLM participants actually make a profit. LuLaRoe told Quartz in August that "72.63 percent of their consultants earned their income through selling clothing alone" last year, but the company did not specify what percentage of their consultants actually made a profit. Income is one thing, but profit is something else.

LuLaRoe has been pretty tight lipped since the refund policy change, posting instead about #MotivationalMonday on its official Twitter. Unfortunately for those LuLaRoe consultants caught in refund limbo with thousands of dollars on the line, they're feeling as though they've had the wool — or in this case, spandex and polyester blend — pulled over their eyes.