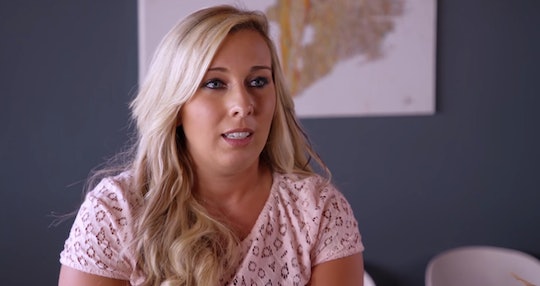 Life hasn't exactly been easy for former Teen Mom OG stars Mackenzie Standifer and Ryan Edwards since they tied the knot in 2017, but it sounds like they now have at least one major reason to celebrate: Mackenzie Standifer and Ryan Edwards have welcomed their first child together, according to Radar Online. The baby, a boy reportedly named Jagger, is the couple's third child — Edwards shares a 9-year-old son, Bentley, with ex Maci Bookout, while Standifer has a 4-year-old son, Hudson, with Zachary Stephens. It's unclear, though, if Edwards was actually able to be present for his newest son's arrival. Earlier this month, Us Weekly reported that Edwards returned to rehab to receive treatment for issues linked to substance abuse (a rep for the couple did not immediately return Romper's request for comment).

Though Standifer has yet to comment on Jagger's birth, she has previously shared updates about her pregnancy on Instagram. In September, she shared a photo of her growing baby bump, and five days earlier she shared a black-and-white photo of her and Edwards kissing. But even though it's clear she was thrilled to have another child on the way, Standifer — who launched her own event planning company in August — has received a ton of judgment from commenters online who have criticized her for having a child with Edwards given his current struggles. If a recent tweet by Edward's mom Jennifer (aka, "Mimi Jen") is any indication though, it sounds like she definitely has family support. On Monday, Jennifer appeared to confirm the news of her newest grandchild's arrival, with a tweet that read, "Blessed!!"

In March, Standifer spoke to E! News about her pregnancy, and shared that she was struggling with morning sickness, but that Edwards, for one, was "so excited" about the baby, and that they were "definitely ready" to add another member into their family. But while she did indicate that she expected her pregnancy to be documented for the MTV reality show, in July she and Edwards told the outlet that, actually, they wouldn't be returning to Teen Mom, and claimed that the network did not "want to show Ryan as a recovering addict."

In an Instagram post July 20, Edwards spoke out about his recovery, and claimed that MTV had portrayed him unfairly.

I've made mistakes and I have really messed up in the past but there is so much hope ahead and it doesn’t mean I can’t change the future ... Don't take everything you see on MTV as factual truth. They don’t want to show me or Mack in a happy light or that I am active in my recovery. I AM. They want me to look angry, passive aggressive and uncaring regarding things that mean the most to me.

Though neither of them have opted to comment on Edwards' return to rehab, it does appear that Standifer is absolutely in his corner: in her most recent Instagram post, shared in September, she posted a sweet photo of the two of them holding hands, along with a quote from Maya Angelou. Standifer wrote, "In all the world there is no heart for me like yours. In all the world there is no love for you like mine."

There's no question that Edwards and Standifer have definitely had their share of challenges over the past few years, and if Edwards did miss his son's birth that certainly couldn't have been easy for anyone. But hopefully Jagger's arrival will be the beginning of an easier time ahead — and that, regardless, they'll at least have the chance to celebrate their son the way all new parents should be able to.