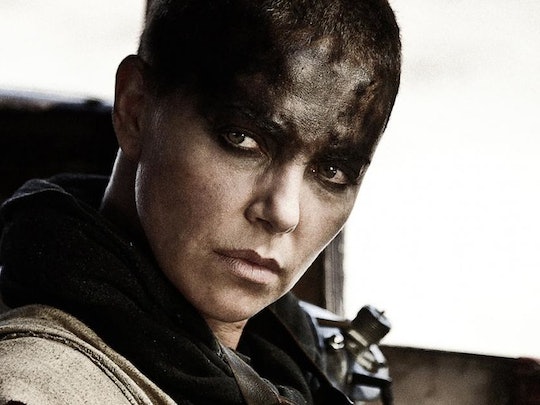 After the release of the movie earlier in 2015, we all secretly hoped this day would come, and this morning, it did. While awards season is just beginning to unfold, we know one thing for certain: Mad Max: Fury Road has received a Golden Globe nomination for Best Picture, Drama, and it's a huge statement for women, for the film industry, and for feminism in general. Women in Hollywood are, as a rule, underpaid and not taken as seriously, but with Mad Max: Fury Road's win, this could mark a huge shift in the way we talk about women's roles and compensation within the Hollywood film industry.

It's also taking a whole new slant to the post-apocalyptic genre. In most post-apocalyptic stories, things don't go too well for women. Rarely, if ever, are women portrayed in powerful roles where they're leading the charge instead of sitting idly by. Suddenly women are looked at only for their breeding capabilities or for sexual fulfillment of men. (See: Margaret Atwood's work and P.D. James's Children of Men or the film Waterworld.) The same is true of the women in Fury Road who are being rescued from a harem. Except, in this story, women are the rescuers and the revolutionaries. Hell yes.

Mad Max: Fury Road does more than just award women a seat at the table — it invites us in, allowing us to sit elbow-to-elbow with actors and the men behind the camera. Mad Max makes us known in a way that women, historically, have not been shown: This time around, we're the saviors. We're the doers, not solely the damsels in distress. Recognition from the HFPA and the Golden Globes helps validate that experience. Did we need in order to know that Mad Max: Fury Road was a feminist film? Absolutely not; we came to that conclusion on our own. But is the recognitions still worthwhile? Absolutely. The more representation of women in these types of roles by industry professionals only helps further the cause.

Its nomination also secures its place among serious movies, and taking it far away from the "feminist piece of propaganda posing as a guy flick" that men's groups claimed it was. As far as I know, The Hollywood Foreign Press Association doesn't have an award for Best Piece of Propaganda. No, it is, in fact, trying to honor filmmaking artists.

In order to understand the importance of the nomination, it's worthwhile to think about the film's roots. Mad Max has been around for ages, but 2015's iteration doesn't follow Max. Instead, the world has ended and survival is not guaranteed. The film follows Furiosa, played by Theron, who's depicted as a warrior of the road. Our introduction to Furiosa comes right at the start of the film where we see her carrying a car full of the wives of the tyrannical leader Immortan Joe. Furiosa has kidnapped them in the hopes of getting them to the Green Place, a sanctuary she remembers from her childhood. (Women saving women, did y'all catch that? Because it's important.)

In Miller's 2015 Mad Max, Furiosa is the hero. Max? Well, he's just her sidekick. When asked about whether or not Theron thought the movie was feminist, she told Entertainment Weekly:

Initially, there wasn’t a feminist agenda ... The thing that people were chasing was to be not an object, but the five wives — I needed a warrior, but it couldn’t be a man taking five wives from another man. That’s an entirely different story. So everything grew out of that.

There also just aren't that many movies out there with large female casts. Sure, there's Steel Magnolias, The Hours, and August Osage County, and Fried Green Tomatoes, and Pitch Perfect; but here's an action flick! Here's a macho, empowering, thrilling movie with more women than men. I'll repeat: More. Women. Than. Men.

It's also noteworthy that Mad Max has a female editor. Now, I for one, would not hate it if there were more thrilling, action-packed, feminist movies that were directed and written by women as well as starring them, but this is for sure a step in the right direction, and the Golden Globes nomination only helps solidify its place.

Whether Fury Road wins or not, it's always going to have the backing and distinction that comes with a Golden Globe Nomination. That's something definitely worth celebrating.

More Like This
How Much Does The 2023 Super Bowl Ring Cost?
The Best Dressed Parents At The 2023 Grammy Awards
Beyoncé’s Kids Got A Sweet Shout-Out As She Made History At The Grammys
Kit Harington Announced His Wife Rose Leslie Is Pregnant With Their Second Child
What Parents Are Talking About — Delivered Straight To Your Inbox