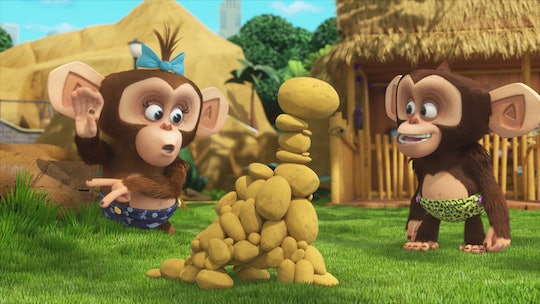 In many ways, Madagascar: A Little Wild is the origin story of Alex the lion, Marty the zebra, Gloria the hippo, and Melman the giraffe — characters fans of the Madagascar film franchise will be more than familiar with. The new series follows the animals as they grow up in the concrete jungle of New York City, often breaking out of their habitat at the zoo to have adventures and pursue their dreams in the city. New fans will quickly fall in love with the adorable foursome.

With the new series, however, comes new characters. Among those new characters are Dave and Pickles, two monkeys who communicate with each other and the other animals using ASL. You can get an early peek at Dave and Pickles, as well as the rest of the Madagascar: A Little Wild gang, in an exclusive clip DreamWorks Animation shared with Romper ahead of the series' premiere next week.

Filled with fun original music and dance-worthy songs, each episode of Madagascar: A Little Wild will tackle a different theme, such as acceptance, courage, responsibility, and boundaries. According to Mashable, the first season of the series is expected to include six, 22-minute episodes.

Produced by Joanna Stein of Kung Fu Panda: The Paws of Destiny and Dana Starfield of Monster High: Welcome to Monster High, Madagascar: A Little Wild is sure to delight both new and returning fans of the franchise.

Madagascar: A Little Wild will premiere Sept. 7 on Hulu and Peacock, the NBCUniversal streaming service.