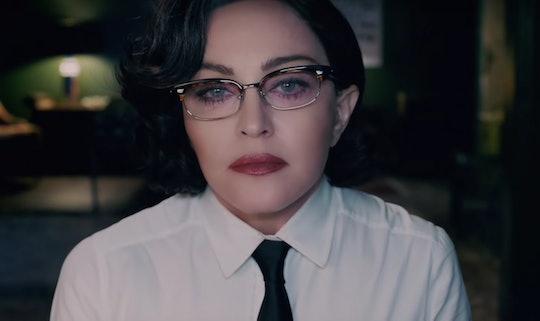 Gun violence and control are two very serious, and polarizing, issues we are currently facing in the United States. During the first Democratic debate on Wednesday evening, Sen. Elizabeth Warren went so far as to liken it to a "public health crisis," which is most certainly is. But behind the statistics, numbers and legislation, exist families mourning the untimely lost of their loved ones. And mothers fearing that something as simple as sending their children to school could result in a tragic massacre. However, some celebrities are utilizing their platforms to spread awareness, like Madonna, who called for gun violence prevention and common-sense legislation in her new song, "God Control," speaking out on what she calls "every mother's" worst fear.

More Like This
The Obamas’ New Family Rule? Get Vaccinated If You Want To Hang Out With Us
Seth Rogen Doesn’t Want Kids Because Being A Parent “Does Not Sound Fun”
12 Kid Guests Who Appeared On Ellen & Stole Our Hearts
Meghan Markle Reportedly Doesn't Want "A Big Baby Shower" As Her Due Date Nears

To be clear, advocacy and awareness should not only be left to the debate stages. It is awesome that Madonna is using her platform, and her notoriety, to speak out on such an important topic. The song and video, which were released yesterday, have a chilling but poignant message, as Rolling Stone reported.

“The story you are about to see is very disturbing,” reads the opening text of the video. “It shows graphic scenes of gun violence. But it’s happening every day. And it has to stop.”

It goes onto show a montage of deadly shootings, a children's choirs singing at a church, scenes from a discotheque and modern-day protests. Throughout the scenes, Madonna is seen writing her lyrics on a typewriter, analogizing to sharing her "message" with the world.

However, Madonna is more than just a concerned citizen. She's also a mother, and a mother who is scared. “I send my children to school with the same fear every mother in this era has,” she recently told People. The singer and songwriter has 6 kids: Lourdes, 22, Rocco 18, David, 13, Mercy 13, and twins Estere and Stelle, 6.

“As a mother, you feel protective and responsible for all of the children in the world,” she told People in the same interview. “It’s really scary to me that the once-safe spaces where we gather, worship and learn are targets. Nobody’s safe. So of course, as a mother, I acutely feel the worry... I made this video because I want to draw attention to a crisis that needs to be addressed. To me, this is the biggest problem in America right now. I cannot take it anymore.”

Late last year, CNN reported that the United States leads the world in child gun deaths. And as the New England Journal of Medicine reported, it is the second-highest cause of death amongst children and adolescents in the country. Though there are many notable shootings that made international headlines, such as Sandy Hook, or Parkland, Florida, ongoing gun violence is a widespread threat, not an isolated incident.

In fact, it is such a pervasive issue that many schools are utilizing "active shooter drills," as USA Today reported, in which kids are instructed on what to do if a individual with a gun came into their classrooms. Though some believe these drills are ineffective, others argue that they shouldn't be necessary, and common-sense gun legislation, which, according to the Washington Post, are simply standards akin to other countries' requirements for gun purchase and ownership, need to be passed.

Madonna advocates for this with her new video. "This is your wake up call. Gun violence disproportionately affects children, teenagers and the marginalized in our communities," she wrote on Instagram. "Honor the victims and demand GUN CONTROL. NOW. Volunteer, stand up, donate, reach out. Wake up and insist on common-sense gun safety legislation."

Currently, there are few regulations for who may purchase firearms in the United States. One, for example, is the Gun Control Act of 1968 which regulates that citizens and legal residents must be 18 years old to purchase shotguns or rifles and ammunition, according to Deutsche Welle.

However, this is not nearly comprehensive enough. Other countries such as Australia have successfully eliminated gun-related deaths and shootings, Slate reported, though the banning of firearm sales. Only time will tell if the United States follows suit, but for now, this is decidedly a step in the right direction.