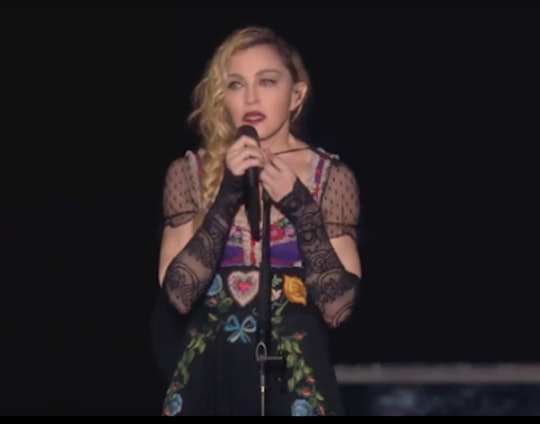 Madonna Gives Emotional Tribute To Paris Victims, & She's Not The Only Musician This Weekend To Pay Her Respects

After the Friday terrorist attacks in Paris — including one that took place at the Bataclan music venue where band Eagles of Death Metal was playing — many musicians cancelled their shows across Europe. Madonna, however, decided to carry on with a pre-planned concert in Stockholm, Sweden the following day, and gave a touching and poignant explanation as to why. Madonna paid tribute to the Paris victims afterwards by playing an emotional rendition of Like A Prayer.

Mid-show, Madge put her guitar down and, appearing to break down, said it had been hard to get through the show so far. "I feel torn," she said. "Why am I up here dancing and having fun when people are crying over the loss of their loved ones? However, that is exactly what these people want to do."

"We must start treating each and every human being with dignity and respect," she said, calling for people to be nicer to one another on a daily basis and in their small interactions. "Only love will change the world, but it's very hard to love unconditionally, very hard to love that which we do not understand, or that which is different than we are. But we have to, or this will go on and on forever."

Other celebs from the music world weighed in on the Paris attacks as well this weekend, bringing a common voice to the horrific attacks that shook the city Friday.