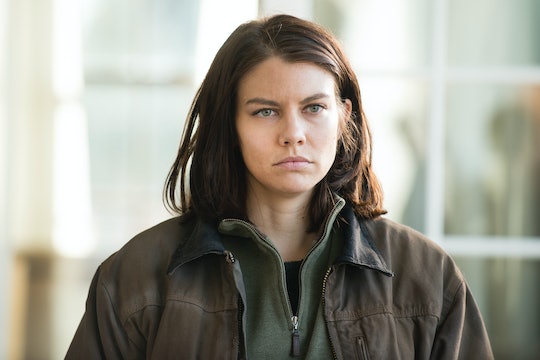 Looks like Baby Judith is about to get a playmate. In Sunday night's episode of The Walking Dead, Maggie announced that she was pregnant, which is both wonderful and disheartening news. Wonderful because, let's face it, even during a zombie apocalypse, a baby is a blessing. But with Glenn still missing from Alexandria, many viewers believe the baby's arrival could mean the end of Glenn.

Since this is a safe space where people can share their Walking Dead theories, I don't think Maggie's pregnancy announcement was much of a shock. The couple had a pregnancy scare back in Season 3, and with condoms being presumably more scarce these days, it wouldn't be a total surprise if they made a Maggie-Glenn fusion. Not to mention, in the Season 6 premier, Glenn discouraged Maggie from joining the mission in order to keep an eye on Deanna as well as "other reasons." I assumed that meant there was a bun in the oven and, as it turns out, I was right.

So why are viewers so saddened by the news? Well, if you recall, The Walking Dead's showrunner Scott M. Gimple shared a very cryptic message regardding Glenn's fate on the series. In his note to the fans, Gimple wrote, "in some way we will see Glenn, some version of Glenn or parts of Glenn again either in flashback or in the current story to help complete the story." Let's see, what's a version of Glenn that could be seen in the current story? How about his offspring?

But, as readers of The Walking Dead comics will tell you, Glenn knows about Maggie's pregnancy in the graphic novels. So if show's producers are trying to mirror the graphic novels, then there is still a chance that Glenn is alive and will return to home to his pregnant wife.

Let's hope for fans of the heroic pizza boy that TV will be imitating comics.