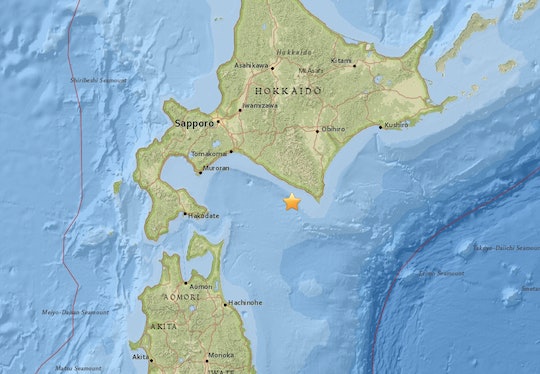 In a report late Wednesday night, USGS officials confirmed that a strong, magnitude 6.7 earthquake had struck Japan's Hokkaido region. Japanese broadcaster NHK reported that the quake's epicenter was located just off of the island's southern tip near Shizunai. According to the USGS, the event occurred sometime around 3:25 UTC. No tsunami warning was issued.

Officials from the Japan Meteorological Agency stated that the quake had occurred at a depth of 50 kilometers (30 miles) beneath the ocean's surface. An AP description noted that there were no immediate reports of injuries or structural damage.

According to the AP, Japanese authorities on Thursday confirmed that they were assessing the extent of the quake's damage, but did not comment further except to say that the local bullet train service had been temporarily suspended and re-opened shortly after. NHK reported that officials were advising locals of possible earthquake-triggered landslides, and that "changes in sea level" were possible.

In an account on the European‑Mediterranean Seismological Centre's website, one witness, located 178 kilometers (110 miles) west of the epicenter in Kutchan, claimed that buildings had been "swaying" back and forth. "Was sat in the third floor of my house," they wrote. "[Structures were] swaying back and forward a LOT!" Another witness in the Monbetsu District, some 216 kilometers (134 miles) north of the quake's epicenter, claimed that they had felt a "[slow] shake."

Japan has a lengthy history of seismic activity due to its location on the Pacific Ring of Fire, a sizable, horseshoe-shaped region in the Pacific Ocean known for its strong earthquakes and volcanic eruptions. In 2011, the Oshika Peninsula of Tōhoku was struck by a massive magnitude 9.0 quake that occurred at a depth of 30 kilometers (19 miles) and lasted around six minutes. The quake itself triggered a colossal tsunami wave that reached 40.5 meters high (133 feet) in some places and ended up flooding three nearby nuclear reactors, sending them into meltdown. In total, Japanese authorities reported a staggering 15,893 fatalities.

Although Wednesday's quake caused nowhere near the level of destruction of the devastating 2011 quake (according to Channel News Asia, buildings in the area have been reinforced over the years to prevent any major structural damage), authorities reportedly advised residents in the region to stay away from coastal regions out of precaution.