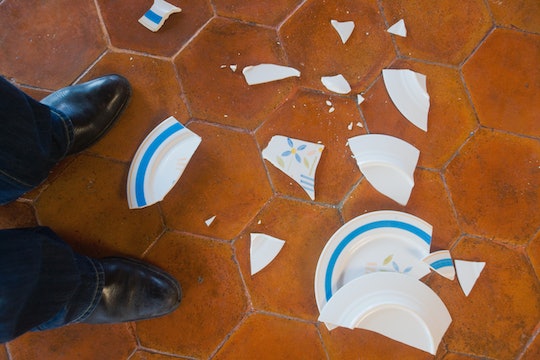 As the violent murder of three children and their mother in Brisbane, Australia has sparked global conversations about domestic violence, one man has expanded the dialogue by opening up about learning to manage his own anger. In an open letter shared on Facebook, actor Toby Francis reflected on the early warning signs of domestic violence and urged folks to "end the myth of the good man" and realize it isn't just so-called "bad men" who are capable of such abuse.

Throughout his post, Francis made references to Rowan Baxter's murder of his estranged wife, Hannah Clarke, and their three young children. According to The Guardian, Baxter allegedly poured gasoline on his four victims before setting them on fire and fatally stabbing himself. Police told The Guardian that domestic violence orders had previously been issued against Baxter by law enforcement on behalf of Clarke.

Francis said that initially he was "shocked and resistant" to his friend's idea. "I would never — and have never — hit or physically hurt my partner," he wrote. "I was not the kind of man that would commit domestic violence, let alone MURDER someone ... I was just the kind of person who needed to break a rake now and then when Lauren and I couldn't resolve a fight. That was all it was. Just a plate or two. Or a hole in the wall."

But his friend's words stayed with him and spurred Francis to research domestic violence. "Troy was right. Abusive words escalate, smashing stuff escalates, pushing escalates, punching escalates," Francis wrote of what he learned from domestic violence survivors and experts. "Every thing I read began similarly, 'he always used to get angry, and then he started punching holes in the wall/smashing plates/slamming doors.' These stories ended with violence. Always. Because, I realized, they started with violence."

Francis went on to characterize violent acts like the smashing of plates, the slamming of a door, or the punching of a wall as "the start of a burning wick that leads to a horrific end." He argued that, when left unchecked, such acts of violence could escalate into more dangerous forms of domestic violence, no matter how "good" of a person you think you are.

"We must end the myth of the good man," Francis continued. "It isn’t only bad men who are susceptible to perpetrating domestic violence. Good men are only a couple of hundred incremental changes away from being bad men."

Domestic violence organizations like Break The Cycle also warn that an "explosive temper" can be an early warning sign of domestic abuse. The organization notes that, "An explosive temper can be used to control a dating partner's behavior" through fear. Break The Cycle also notes that while anger can be a healthy emotion when expressed properly, it's not OK for to "scream, yell, throw objects, or threaten to harm" your partner or yourself. "Smashing things" is also listed as type of domestic violence by the National Domestic Violence Hotline.

But it isn't just advocacy organizations that caution against acts of explosive violence like breaking plates. In an article for Psychology Today, marriage and family therapist Darlene Lancer said that one-third of women and one-fourth of men will have experienced some kind of interpersonal violence, also known as intimate partner violence, in their lifetime, noting that such violence includes "throwing or breaking things."

To deal with his own anger, Francis said he sought professional help. "We must be better men. We must be better husbands and partners. We must be better fathers. And we must be better mates," he wrote. "Nothing will change without us changing ourselves, without holding our friends and family members accountable, change can only truly come from us because it starts there. And it ends there. It starts and ends with us."

While Romper's request for comment from Francis was not immediately returned, he told News Corp Australia that he'd been motivated to share his own experience in an effort to raise awareness about the behaviors from which domestic violence can escalate. "I think most men don't speak up about breaking things or punching holes in walls or admit that it's wrong, because they don't want to be perceived as someone who is committing domestic violence, when that's actually what it is," he told the news outlet. "And if you don't think that you're doing anything wrong and if you don't think that it's domestic violence then you won't ever have an impetus to stop it."