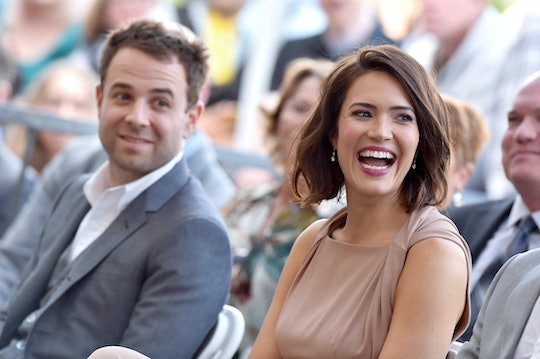 After playing Rebecca Pearson for the past four seasons on This Is Us, the actress behind the beloved mom of The Big Three is officially starting a family of her own. On Thursday, Mandy Moore revealed she's pregnant and expecting her first child with her husband Taylor Goldsmith.

"Baby Boy Goldsmith coming early 2021," Moore captioned an Instagram post that featured several sweet black and white shots of her and her musician husband holding her growing bump. Goldsmith shared the same photos and caption on his Instagram.

Moore has been open about her desire to become a mother one day. The actress shared during an appearance on Sunday Today with Willie Geist that she was ready to become a mom "sooner rather than later."

And now Moore and Goldsmith, who have been married for nearly two years, are getting to start this exciting chapter of their lives. "I've always wanted to be a mom," she said during the same interview with Sunday Today. "I think that's definitely the next chapter for me."

Beyond preparing for her baby's arrival, Moore has been busy shooting the new season of This Is Us, which had been put on hold due to the coronavirus pandemic. On the same day she announced her exciting news, Moore shared videos of her on set of the ever-emotional and popular TV show.

Whether or not Moore's pregnancy will be written into the show remains unclear at the moment, but it seems like it could be a possibility. After all, while he was probably referring to the ongoing pandemic, the show's creator Dan Fogleman told Entertainment Weekly that this season will incorporate "current world events."

As fans wait for Season 5 to premiere and see how it all unfolds, hopefully Moore will share some behind-the-scenes looks at her pregnancy over the next few months.

More Like This
Chrissy Teigen Revealed Her New Baby Girl's Unique Name With A Precious Family Photo
Sally Field Is The Ultimate Cool Mom Who Once Tried To Set Her Son Up With An Olympian
Marie Kondo Gives Up Tidying Post-Kids, Sparking Joy For Moms Everywhere
Keke Palmer Casually Drops Her Baby's Sex On Jimmy Fallon
What Parents Are Talking About — Delivered Straight To Your Inbox