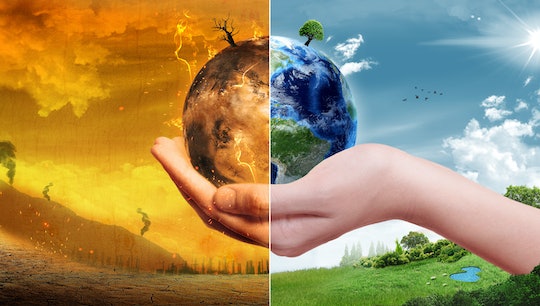 Poll Finds Climate Change Isn't Getting Enough Attention In Schools, But It Should

Generation Z is already on the frontlines of political activism — from being vocal about gun violence prevention to being critical of the current government, today’s kids and teenagers are already doing their part to save the world. However, new research conducted by NPR and Ipsos suggests that the next generation may not be taught enough about a crucial subject in school to fully equip them. In fact, a new poll’s findings published by NPR on Monday shows that many kids aren’t taught about climate change in school, although most parents wish that they were.

According to the poll’s findings, more than 80 percent of parents across political divides in the United States believe that climate change should be taught in school. A separate poll conducted by NPR showed that 86 percent of U.S. teachers agree that the subject should be included in the syllabus. However, 55 percent of the teachers surveyed said that they do not cover climate change in the classroom and nearly 65 percent of the responding teachers said the topic fell outside of their subject area.

NPR reported the poll found "obstacles" to teaching about climate change include a shortage of materials, potential parent complaints, and school restrictions on the subject. Still, 52 percent of all the teachers surveyed said that they believe there should be state laws in place mandating the teaching of climate change.

And, perhaps, that should be the case. But why is education on the topic so important?

Primarily because it is children who will be facing the intensifying impacts of climate change in the years to come. Even now, children’s health is disproportionately affected by climate change, according to Yale Climate Connections (YCC). Frederica Perera, the director of the Columbia Center for Children’s Environmental Health, told YCC that children are most vulnerable because their immune systems have yet to mature and are more sensitive to disease and environmental contaminants caused by climate change.

Reporting by ChavoBart Digital Media suggests that children are more likely than adults to die from diarrheal disease, an illness that is expected to become more widespread in particular areas, including low-income countries and communities, as climates warm, according to research from the U.S. National Library of Medicine National Institutes of Health.

Additionally, Aaron Bernstein, the co-director of the Center for Climate, Health, and Global Environment at Harvard, wrote in 2018 that climate change could also worsen obesity, which he said is "the number one health crisis" facing today’s children, by limiting children’s ability to stay active outside. He also pointed out in his article for Harvard that air pollutants especially affect the lungs of children with asthma and also the fetuses of pregnant women. Indeed, air pollution, according to research published in BMC Public Health, is associated with premature birth, smaller babies, and lifelong health problems.

But perhaps because of this first-hand impact and despite the lack of standard climate change education in the classroom, the kids of Generation Z are still passionately outspoken on climate change. For instance, Greta Thunberg, a 16-year-old Swedish climate activist and force behind school climate strikes, has been unafraid to address the big issues, as the BBC reported.

"The politicians and people in power have gotten away with not doing anything at all to fight the climate crisis ... but we will make sure they don't get away with it any longer," she said to a crowd of protestors just yesterday, according to The Guardian. "We will never stop fighting, we will never stop fighting for this planet, for ourselves, our futures and for the futures of our children and grandchildren."

Children in the United States are also rising to the cause. Congresswoman Ilhan Omar’s 16-year-old daughter Isra Hirsi co-organized the U.S. International Youth Climate Strike, an international protest staged on March 15 in which students from across the globe walked out to demand urgent action on climate change from leaders, according to National Geographic.

"I think that young people sense the urgency," Hirsi explained in an interview with The Cut. "These adults don’t really have to live with the problem of climate change, and young people have to deal with it for the rest of our lives."

She even expanded on how the crisis uniquely affects people of color and the importance of representation in the movement when speaking to The Grist. She said, "People of color are disproportionately affected by climate change and that kind of just gets ignored. People are living with these things right now."

In fact, according to "Climate Change Literacy and Education Social Justice, Energy, Economics, and the Paris Agreement" published by the American Chemical Society, communities of color are not only more likely to be affected by industrial pollution, but they are often also left out of discussion regarding climate change legislation.

Considering that some political leaders and thinkers, including the President of the United States, deny the facts of climate change and encourage the spread of false information, it is even more important now that children are taught the science and facts behind the phenomenon.

Even if climate change isn’t yet a mandated subject in school, there are still ways to educate others and our children about the topic in ways that could lead change. This Earth Day, April 22, add climate change to the list of important issues to discuss with your children and start by making positive alterations in your lifestyle. Make conserving the planet a top priority — generations to come depend on it.