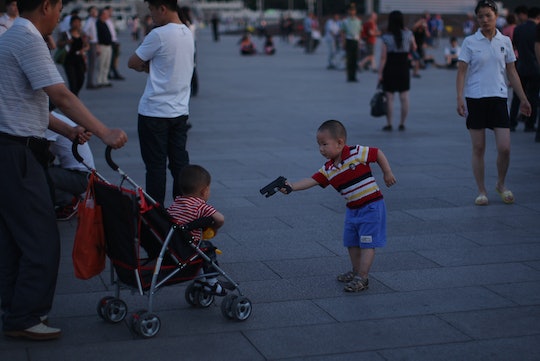 Over time, the look of toy guns has altered, with many of them becoming incredibly realistic. Now, there's a lot of toy guns on the market that look almost indistinguishable from real guns. So, how do kids tell which is which? According to a new survey, kids don't know the difference between real and toy guns. That's obviously dangerous, but it's not the most shocking thing this survey found.

Toys guns have become a regular topic of debate as many people wonder how safe it is to normalize playing with kids. For many, toy guns pose real concerns when it comes to accidental shootings. According to Everytown, research shows that about 4.6 million American children live in homes with at least one gun that's loaded and unlocked. Everytown notes that there have been at least 999 unintentional shootings by children since 2015, with 391 of them resulting in death.

The debate around toy guns may seem excessive. What kid is going to mistake a real gun for a toy, after all? Using a convenience sample of people who presented at three pediatric emergency departments, a few researchers decided to look into just that.

Of the sample presented, Med Page Today reported that between 53 to 74 percent of caregivers believed their child could discriminate between real and toy guns, as did 68 percent to 88 percent of the children.

Kiesha Fraser Doh, who conducted the study, said, according to Science Daily:

One of the most dramatic findings was how easily caregivers and children can confuse real guns with today's realistic-looking toy guns. Especially considering gun owners surveyed were nearly twice as likely as non-gun owners to let their children play with toy guns, safe storage of firearms in homes where children play is critical.

"If you think about it, the majority of parents are storing their firearms insecurely, and the children cannot tell the difference between a real gun and a toy firearm," Fraser Doh noted, according to Med Page Today, adding:

What this study tells us is that it behooves pediatricians to continue to educate their families on how to store firearms safely, and is a reminder to parents to check on how firearms are being stored in homes where their children are visiting.

If you do have guns in the same home as children, Project ChildSafe notes a few key guidelines for safe storage. First, all guns should be unloaded and stored in a locked cabinet, safe, gun vault, or storage case that's inaccessible to children. Additionally, ammunition should be stored in a locked location separate from the guns and all firearms should be double checked to confirm they're unloaded when removed from storage, according to Project ChildSafe.

As toy guns get more realistic, it's harder for kids to tell the difference, as this survey showed. It's time to start holding real conversations about gun safety, with both kids and adults.

More Like This
Mindy Kaling Has The Chillest Response To Rumors That B.J. Novak Is Her Kids' Father
Scotland Becomes First Country To Make Pads & Tampons Free For Anyone Who Needs Them
2 Million MamaRoo Swings & 220,000 RockaRoo Rockers Have Been Recalled
These Capri Sun Pouches Have Been Recalled Because They May Contain Cleaning Solution