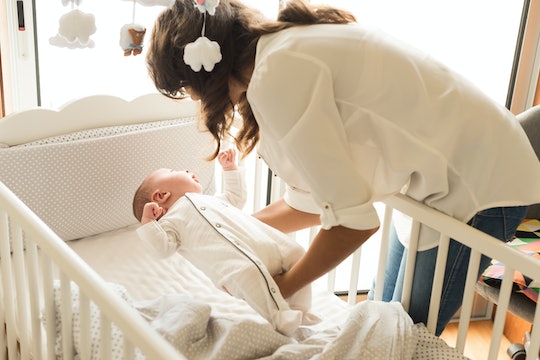 There are so many things to worry about as a new parent, especially regarding your baby's sleep. One area of concern? Keeping them safe throughout the night, as potential health hazards can arise if you don't follow certain practices. And unfortunately, a new study reveals many moms aren't following safe infant sleep guidelines.

Nearly two thirds of moms are not following recommended safe sleep practices for their babies, which is worrisome considering the recommended guidelines can help prevent sudden unexpected infant death (SUID), according to the study published Monday in Pediatrics, the official journal of the American Academy of Pediatrics.

Before I get into the specific numbers, best practices include, according to ABC News:

The study, which surveyed postpartum women nationwide (although this topic definitely applies to dads too, the survey only talked to moms) show 78% of mothers are putting their babies to bed on their backs, which is promising. But far fewer moms are following the AAP's other recommendations. In fact, only 57% are both room-sharing and not bed-sharing, while about 42% percent avoid soft bedding where the baby sleeps. And just 32% are using a separate, approved sleep surface.

Of course, this study isn't designed to mom-shame — it simply intends to shine a light on the areas where care providers can improve their information dissemination.

“We have substantial room for improvement for these sleep practices,” Ashley H. Hirai, PhD, study author and senior scientist at the Maternal and Child Health Bureau of the U.S. Department of Health and Human Services said, according to SheKnows. “I think we need to do a better job, such as having better media campaigns in addressing the broader recommended practices, beyond ‘back to sleep.’"

Hirai has a good point when you consider these stats: Although 90% of mothers said their pediatricians advised them on putting their babies to sleep on their backs, 85% were told what items were safe to have in baby’s sleeping area, and 84% were told their baby should sleep in a crib, bassinet, or pack and play, less than half received advice to place a baby’s crib in the same room as their parents. This means doctors may need more training in educating parents on better sleep practices.

Speaking of educational campaigns, in 1992, the "Back to Sleep" campaign was founded to educate new parents on the safety benefits of putting babies on their backs to sleep, which resulted in a 45% drop in overall SID deaths, according to WebMd. Since then, the federal government launched the "Safe to Sleep" campaign to include other sleep safety recommendations.

“The bottom line is to raise awareness about these better sleep recommendations,” Hirai said. “And so we just want to hit that home that the safest place for babies to sleep is on their back, on a separate [approved crib, bassinet or pack and play], without any soft bedding and that they should be in the same room as their caregivers.”

Unfortunately, there can be dire consequences for not following these important recommendations. More than 3,500 babies in the U.S. die suddenly and unexpectedly every year while sleeping, often due to sudden infant death syndrome (SIDS) or accidental deaths from suffocation or strangulation.

As always, any concern regarding your child's health should be brought to the attention of your pediatrician. But when it comes to safe sleeping, these guidelines from the AAP are a good place to start.

More Like This
New York Can End Religious Exemptions to Vaccine Mandates, Says A Federal Appeals Court
Angelina Jolie Reveals That Daughter Zahara Is Headed to Spelman College
13-Year-Old Makes History As Youngest Black Person To Be Accepted Into Medical School
Why Does My Baby Cough While Breastfeeding? Experts Explain