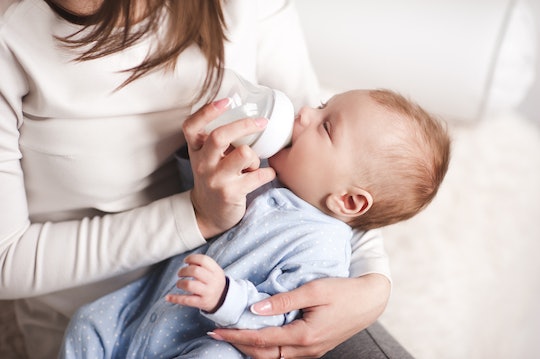 How a mother feeds her baby is an extremely personal decision. So many factors go into this choice between breast and bottle — and sometimes, it isn't even a "choice" at all. Because as much as a new mom might want to exclusively breastfeed her child, if she doesn't have support in this decision or if her body doesn't provide a sufficient milk supply, it simply might not be within the realm of possibility. With this in mind, many moms who struggle to breastfeed feel guilt, a new survey finds, and it isn't hard to see why.

So here's the lowdown: The American Academy of Pediatrics (AAP) recommends exclusive breastfeeding for the first six months of life, and then continued breastfeeding and the introduction of solids from 6 months to at least age 1. It makes sense, considering breast milk offers a number of health benefits for both mom and baby that are simply not offered by formula-feeding. But it seems as if the "breast is best" push to increase breastfeeding rates has managed to have a negative effect on moms who struggle to breastfeed.

This is evident by a recent poll that asked more than 1,000 UK women between the ages of 18 and 40 who had a baby in the past decade about their breastfeeding experiences, the Daily Mail reported. According to the poll by BBC Radio 4's Woman's Hour, half of mothers who breastfed struggled to do so. And although two-thirds of the moms said breastfeeding was one of the best parts of being a mother, half of them also said it was one of the hardest.

As the Independent reported, over a third of women in this poll who formula-fed their baby said they felt guilty or embarrassed for giving their baby formula. In fact, one in seven women surveyed said that how they fed their baby had a negative effect on their mental health. "Often women are told what they should be doing without a full understanding of the factors that affect a woman’s decision to feed by breast, bottle, or both," said Karen Dalziel, editor of Woman’s Hour, per the Independent. Dalziel continued:

This poll gives clarity on those reasons and shows that feeding babies is a complicated and emotional experience — it exposes the impact healthcare professionals, family, and friends can have on the whole experience.

Here are other interesting tidbits of information I took away from the survey:

"The results of the poll provide some really interesting insights into how different the experience of feeding your baby can be," said BBC Radio Sheffield editor, Katrina Bunker, according to the Independent. "For some it is obviously a magical part of motherhood, for others it can be traumatic and associated with pressure and a lack of support. There is clearly a bigger conversation to be had on the subject."

Yes, there definitely is a bigger conversation to be had. Because although breastfeeding does offer health benefits that formula does not — like antibodies, immune factors, enzymes, and white blood cells, which help protect babies from diseases and infections — it's simply not possible for every mother. With that said, I'm not sure what the answer is exactly. All I know is there's a fine line between actively promoting breastfeeding and inadvertently making mothers feel like crap because it just didn't work out for them. And clearly, there's room for improvement.