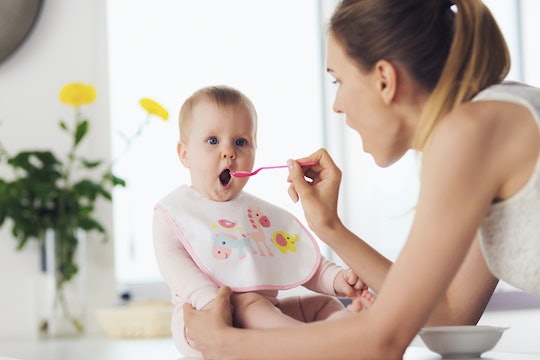 Many Parents Make This Potentially Dangerous Mistake With Holiday Babysitters

As families gear up for the holiday season, children will soon have extended breaks from school — and many parents will likely be busy finishing up shopping and/or attending holiday gatherings. This change in schedule (not to mention, the closure of schools and regular daycare centers) might require parents asking visiting family members or fill-in babysitters to provide extra child care. Which is probably fun and a nice change of pace for the kiddos. Except, many parents make this potentially dangerous mistake when leaving kids with their holiday babysitters, according to a new poll.

Although regular child care providers are probably equipped with with all of the information they need and then some, the new survey found that many parents underestimate how important it is to prepare holiday sitters for things like injuries or emergencies. This was revealed by the new C.S. Mott Children's Hospital National Poll on Children's Health at the University of Michigan. Science Daily reported that less than half of the 386 parents of children ages 0-5 who were polled left crucial emergency contact info for holiday sitters — like parents' work or cell numbers (48 percent), the number for the child's doctor (47 percent), and contact information for another family member or friend (42 percent).

Even more surprising? Parents were less likely to post this emergency contact info if they lived more than 15 minutes away from an emergency room than were parents who lived closer to an ER, according to the New York Post.

Family members and friends may be a natural choice to help watch children but parents should make sure they are preparing babysitters for emergencies, especially those who don't have young children themselves. Sitters should be able to easily find key contact information and be comfortable handling different types of emergencies. Parents shouldn't assume sitters have all of the information they need. They should go over basic information whether they will be gone all day or just a couple of hours.

The new poll from the University of Michigan also included responses from 546 adults without any children ages 0-17 living in their household, accord to the news release. For these questions, the childless adults were asked how they would respond to a number of urgent medical situations if they were caring for a 3-year-old child. Here's a glimpse the responses, according to Science Daily:

So what, exactly, should parents be telling substitute babysitters? In the news release, Clark explained that in addition to leaving important phone numbers, parents should have a conversation with sitters about ways to handle hypothetical situations.

Leaving a first aid book as a guide for non-urgent issues might be a good idea. And in the event a more serious incident should occur, parents might also want to communicate if there is a specific emergency room or hospital they prefer — along with situations that would warrant calling 911 instead of taking the child to a hospital in their own vehicle. Furthermore, if your child has a health condition, allergies or takes medication, leaving written information is particularly important in the event of an urgent doctor's call or ER visit.

Honestly, it doesn't surprise me one bit that many parents neglect to address these safety topics with fill-in babysitters. Especially during the holidays, parents (myself included) are pulled in a million directions and have a to-do list a mile long. It's easy to forget grandma who lives hundreds of miles away hasn't actually cared for a toddler in decades, and isn't familiar with your child's medication. Or that maybe the teenager who is watching your children for a few hours while you finish up holiday shopping has no idea what to do if someone starts choking.

A few precautionary steps and a serious conversation about the dreaded what-ifs are all it takes to make sure everyone is on the same page — and this new poll serves as a perfect reminder for parents.