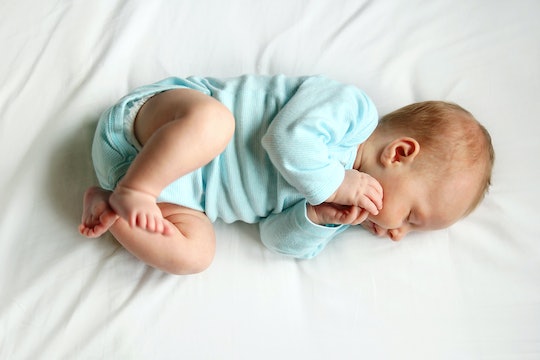 Choosing a crib mattress has been one of the most stressful parts of preparing for my coming baby. Concerns over keeping my baby safe while sleeping have been enough to keep me up at night. I finally found one that met my requirements, but it wasn't easy wading through the many options on the market. Despite the risks of Sudden Infant Death Syndrome, many popular baby sleep products don't meet safety guidelines and experts worry that misleading advertisements are causing parents to make bad decisions despite having the best intentions.

Just in time for Safer Sleep Week (March 12 - 18), sleep safety nonprofit The Lullaby Trust is warning parents that popular items such as cushioned sleeping pods, nests, baby hammocks, crib bumpers, pillows, duvets, and anything that wedges or straps your baby into bed are not approved for use with children younger than 1 year old, according to HuffPost UK. All of these products can pose a risk of SIDS. The Lullaby Trust is also warning that manufacturers of these items often make unproven safety claims, further confusing parents.

The Lullaby Trust is tackling the issue head on, issuing guidance for parents along with Public Health England to help them make safe, informed decisions when it comes to sleep products for their infants, Mumsnet reported. These recommendations mirror much of what the Centers for Disease Control and American Academy of Pediatrics have to say about safe sleep.

Francine Bates, chief executive of The Lullaby Trust told HuffPost UK that the kinds of products included in the organization's warning are growing in popularity and muddying the waters of sleep safety:

We have watched with concern as products that go against safer sleep advice gain popularity. It is hard for parents when they are trying to choose from the overwhelming number of baby products on offer and many people make the reasonable assumption that if an item is sold on the high street or made by a recognized brand it is safe for their baby.

The "Back to Sleep" campaign has been ongoing since the 1990s, but the Atlanta Journal-Constitution reported that Centers for Disease Control and Prevention data shows that 22 percent of mothers have admitted to not following the official recommendation to put babies to sleep on their backs. What's more, 39 percent of moms "reported using soft bedding like bumpers that could pose a choking hazard in cribs," according to the Journal-Constitution. The CDC and the American Academy of Pediatrics advise against using soft bedding or bumpers. The persistent popularity of these very products is what motivated Bates and The Lullaby Trust to speak out against these products.

When attempting to navigate the many options available for baby sleep, the AAP recommends that parents think simple. You don't need nests or bumpers or anything else in the crib aside from a firm mattress with a tightly fitting sheet. Keep pillows, blankets, stuffed toys, and bumpers out of the crib as well. Additionally, always put babies to sleep on their backs, never on their sides or stomachs. The AAP also advises against co-sleeping, but other reports have contradicted claims that bed-sharing is unsafe.

Carseats, harnesses, and swings also increase suffocation risk, according to the March of Dimes. Babies famously sleep well in carseats and swings, but parents should take them as soon as possible once they actually fall asleep and place them in their cribs.

I'll admit to being tempted by a baby sleep hammock that promised to keep my baby's startle reflex from waking her up during the night. But after reading more about the actual safety of these self-proclaimed wonder products, I decided to stick with a good old fashioned crib and mattress. Helping parents to be more informed about the products their babies sleep in is an important step towards reducing SIDS rates.