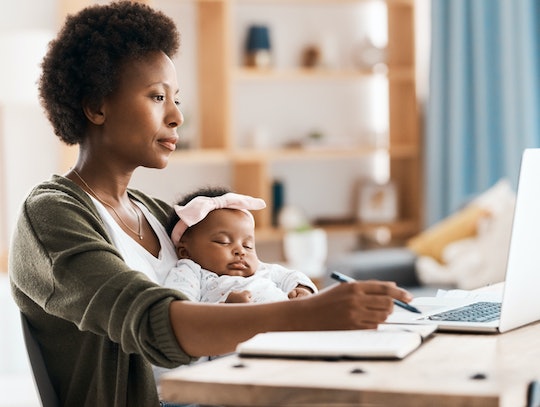 The steep and rising cost of child care in the United States is never far from working parents' minds, but a new report from The Center for American Progress has found that mothers employed in a number of vital industries are especially impacted by the price tag. In fact, the report found working mothers oftentimes can't afford child care. While that's already troubling, this stands to also have a serious impact on the U.S. economy as the high costs of child care eats away at a larger portion of families' income before ultimately forcing more and more working moms to exit the work force.

"The cost of raising a family is out of reach for too many working families," Sarah Jane Glynn, Senior Fellow with the Women's Initiative at the Center for American Progress and one of the report's authors, tells Romper. "This new analysis shows that a key driver of that struggle is child care prices that account for much — and in some cases all — of the income brought home by mothers working in the most common industries."

While data from the U.S. Department of Labor shows that child care costs have more than doubled in the last 20 years, wages have remained relatively stagnant, putting families — and working mothers, in particular — in tough situations. As The Center for American Progress' report, The Economics of Caregiving for Working Mothers, points out, the participation of mothers in the workforce is largely dependent on having access to child care that's actually affordable.

Unfortunately, child care is anything but low cost nowadays. The Center for American Progress reports that a low-income family pulling in a yearly income of less than $50,000 in 2014 will have spent one third of that income covering child care costs. According to the Economic Policy Institute, the U.S. Department of Health and Human Services considers child care to be "affordable" if it totals no more than 7% of a family's yearly income. By that definition, The Center for American Progress says that all but the highest income families find themselves without access to affordable child care.

In examining the economic impact of rising child care costs, The Center for American Progress found that certain industries were likely to be experience more of an effect. That's because working mothers are more likely to work in one of three industries: elementary and secondary education, hospitals, and food service. The Center for American Progress notes that one out of four working moms is employed in one of these industries, all of which are considered to be caregiving industries.

The problem? Median wages in these industries don't allow for covering both the rising costs of child care and other basic necessities like food, housing, or clothing. For example, The Center For American Progress' report notes that the median salary for a K-12 teacher falls at $41,000 while the median yearly wages earned by someone in food service totals just $15,000. The yearly cost of placing one child at a licensed child care center comes in at more than $10,000, according to data provided by Care.com. For two children, that cost can jump to over $20,000.

When comparing the cost of having two children under the age of 5 in child care with median household and personal earnings for working mothers, The Center for American Progress found that child care costs totaled 29% of a median household income and 75% of median personal incomes. Both numbers are far greater than the federal government's 7% threshold for affordability.

What's more, when comparing the average price of child care for two children with the average personal earnings for black, Hispanic, American Indian, or Alaska Native working mothers, the report found that the cost would be equal to or greater than their personal income. The report also noted that black mothers are more likely to report cost barriers to child care than white mothers, which may be, at least partially, due to racial disparities present within the gender wage gap.

But mothers, and working parents in general, make up a significant proportion of the country's labor force. And their wages and employment are considered to be vital to the overall health of both the economy and the labor market. Mothers who work in vital caregiving industries such as schools and hospitals and food service, provide contributions that go even deeper than economic gain.

"It is not an exaggeration to argue that American society would not be able to function in its current state without the work being performed in these industries, and a lack of affordable child care options threatens working mothers' ability to continue providing these essential functions," The Center for American Progress notes in its report.

Researchers argue that supporting working mothers, who are more often employed in vital industries and whose presence in the work force strengthens the U.S. economy, means supporting public investment in affordable child care. One immediate means of doing exactly that, The Center for American Progress says, is for Congress to pass the Child Care for Working Families Act, thereby limiting child care costs to 7% of household income.

"Working mothers are central to the nation's economic growth, the development and maintenance of healthy communities, and their families' financial security," the report says. "Because most mothers work for pay even when they have very young children, adequate investments in child care are vital to the economic, physical, and emotional health of families and communities."

More Like This
Ginger Zee Had A Perfect Response After A Troll Asked Her "Who's Raising Your Kids?"
Ketanji Brown Jackson Spoke Directly To Her Daughters In Her Powerful Opening Statement
6 Takeaways From The White House’s First-Ever Parents Press Conference
It's A Beautiful Day In Jenny Slate’s Neighborhood