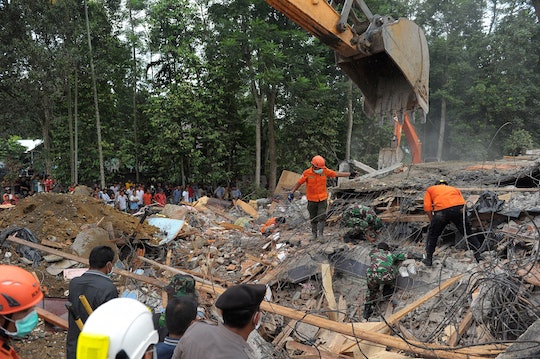 A 6.5-magnitude earthquake that struck Indonesia early Wednesday morning has killed almost 100 people, according to CNN, although officials warned the number could still rise as search and rescue teams continue to search for bodies in the rubble. The earthquake is actually the second to occur in the country this year, and given the fact that Indonesia sits on a series of fault lines in the Pacific Ocean known as the "Ring of Fire," the heartbreaking reality is that earthquakes aren't entirely uncommon there. But many of Indonesia's residents are still reeling from the massive tsunami that hit in 2004 — and a map of Indonesia shows that the earthquake hit the Aceh province in Northern Sumatra the hardest.

In addition to the 97 people confirmed dead, Aceh province army chief Maj. Gen. Tatang Sulaiman said four people were also pulled from the rubble alive, according to The Telegraph. Crews of rescuers have been using excavators to dig through the collapsed houses and buildings throughout the day, and Sulaiman told reporters he hoped the evacuation would be completed by sunset. Over 250 others were injured as a result of the earthquake, but managed to evacuate their homes. Most of the deaths occurred in the region of Pidie Jaya, close to the epicenter of the earthquake.

According to ABC News, The U.S. Geological Survey said the earthquake hit at 5:03 a.m. local time on Wednesday morning, about 6 miles north of the north Aceh town of Reuleut. Despite the magnitude, officials have not issued a tsunami warning, which is likely to be at least somewhat relieving to residents, given that the 2004 tsunami claimed more than 160,000 lives in Indonesia, mostly in Aceh province. A state of emergency has been declared in Aceh, according to Reuters, and residents have been warned to sleep outside Wednesday night, as the remaining risk of continued aftershocks could mean more buildings could still fall.

Indonesian President Joko Widodo is expected to travel to Aceh Thursday, according to Reuters. Reports of a shortage of medical staff in the area have meant that the injured have had to be "treated in hospital corridors and hastily erected disaster tents," and relocated to other hospitals. The country's national disaster management agency has so far sent more than 1,000 military personnel and volunteers to assist with the relief efforts.

According to The New York Times, rescue teams were having trouble communicating with government agencies, leading to conflicting reports about how many were killed. After the quake, hundreds of buildings collapsed, and many of the victims were thought to be killed in their homes while they slept. The Indonesian Red Cross is now focusing on providing aid to survivors, particularly ensuring access to clean water and sanitation, according to the Associated Press. Arifin Hadi, head of disaster management for the Red Cross, said water trucks have been sent into the area, as well as hygiene kits, tarps, jerry cans and body bags.

As the relief efforts ramp up in Indonesia, more information should be forthcoming, including confirmed numbers of those injured and dead, and ways that those looking to help can provide donations and aid to the country.