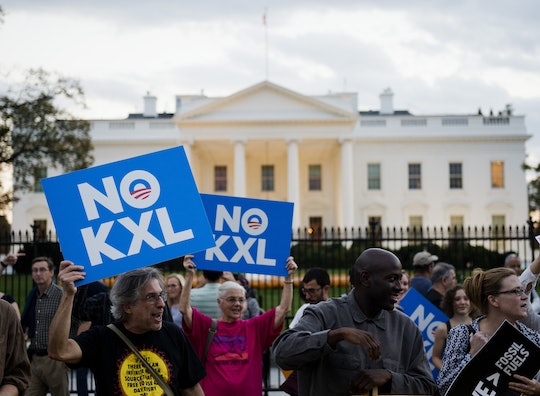 In case you missed it, President Donald Trump has already begun dismantling much of President Barack Obama's legacy. From making moves to repeal Obamacare, to putting construction of the Dakota Access Pipeline back into motion, Trump has made it very clear that he intends to "make America great again," in his own way. And while you may be pretty familiar with the Dakota Access Pipeline and the controversy surrounding it, the Keystone XL pipeline hasn't really been in the news as much lately. Until today, that is, when Trump signed an executive order calling for a renegotiation of the Dakota Access Pipeline (DAPL), as well as the Keystone XL. And while Obama seemingly put an end to Keystone XL back in 2015, Trump has brought the 1,179-mile pipeline back into the public eye. It may seem easy to brush this one off, as it's not as hugely and politically controversial as DAPL, but a map of the Keystone XL pipeline shows the full scale of its potential impact, and it can't be ignored.

Trump's intention in bringing back into play the Keystone XL Pipeline is that it, along with the Dakota Access Pipeline, would create over 28,000 jobs for the American people, and work towards lowering oil costs for consumers.

However, as many experts argue, the jobs created by the building of the pipelines would only be temporary, and not permanent. Furthermore, the kinds of crude oil transported by the pipeline are especially dangerous to the environment, and with a proposed amount of over 800,000 barrels being moved per day, the environmental impact cannot be overlooked.

Another thing that can't be overlooked? How large the Keystone XL Pipeline already is, and what the new additions would look like.

Currently, the pipeline already extends from Canada to south Texas, near the Gulf of Mexico. However, the addition, which Trump and pipeline supporters want to make, would connect parts of the pipeline from Alberta, Canada, to Nebraska, to bring in even more oil.

And while both Republicans and Democrats are in favor of extending the pipeline, the question remains, why is it so necessary? The already existing miles of pipeline between the United States and Canada transport over 500,000 barrels of oil each day, so why do we need more?

With so much of the world realizing that fossil fuels really are hurting us, why is the United States still so adamantly focused on outdated, harmful sources of energy? No matter what science says, it seems Trump is focused on dismantling Obama's environmentally friendly policies. And, for now, nothing can stop him.