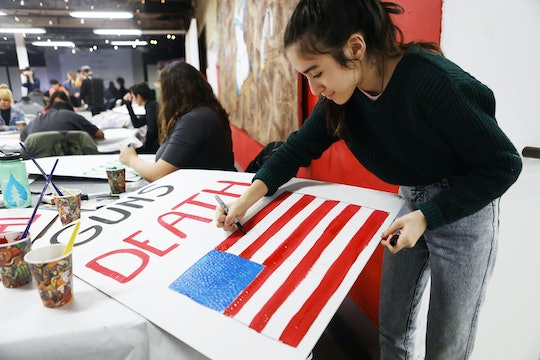 #MarchForOurLives Owned Teen Anger, & No One Is Saying Sorry

Walking through a sea of teenagers, toddlers, parents, grandmothers, nuns, reporters, entire families, and best friends arm-in-arm as an upbeat playlist blasted via overhead speakers, it was easy to assume the #MarchForOurLives was nothing more than an outdoor music festival. An odd festival, to be sure, but a joyous occasion nonetheless. But beneath the smiles of solidarity, the buoyant chants, and the bright messages written in Crayola markers on poster boards, was an unmistakable rage. Teen anger was palpable during the record-breaking March For Our Lives, and it was not to be dismissed. What's currently vexing America's youth isn't unrequited love, or unfair curfews, or any other petty struggle that pits young against old. No, the young people of the United States of America are tired of watching their friends, girlfriends, boyfriends, classmates, brothers, sisters, and teammates be shot and killed in school. And their anger will persist until they get the change they want.

"I am extremely angry that our voices aren’t being heard, and just because we’re younger our voices are considered less valid to those that have more years on this earth," Sophie, 16, tells Romper. Sophie traveled to Washington, D.C. to attend the march with her friends, and was more than happy to express her anger to anyone who would listen. "The years [we have spent] on this earth don’t determine our intellect and don’t determine our capacity to make rational decisions. Because, clearly, what’s being shown here, the youth are making the rational decisions, and Congress is failing to listen to us just because we’re not 'old enough yet'."

Student protesters lining the streets and standing shoulder-to-shoulder weren't the only angry #MarchForOurLives participants. Parkland student-turned-activist David Hogg seemed viscerally infuriated as he stood on stage and addressed what early reports believe to be nearly 500,00 people. "To those politicians supported by the NRA that allow the continued slaughter of our children and our future, I say get your resumes ready," Hogg said. On stage, the high-school senior demonstrated the power that a politically engaged teen generation can have, issuing a call to vote in upcoming elections. "We are going to make this a voting issue. We are going to take this to every election, to every state, and every city. We are going to get make sure the best people get in our elections to run, not as politicians but as Americans. Because this — this is not cutting it."

The student leaders behind #MarchForOurLives were born in the aftermath of the Columbine massacre, which took place in April 1999, and have been defined as a generation by gun violence. Since 20 kindergarteners and six adult staff members were murdered at Sandy Hook Elementary School on Dec. 17, 2012, more than 400 people have been shot in over 200 school shootings, according to The New York Times. And Congress has failed to enact common sense gun laws over, and over, and over again. From allowing the 1994 federal ban on assault weapons to expire in 2004, to failing to enact a similar ban in 2013 after Sandy Hook, to the Florida Senate refusing to even consider an assault weapons ban days after the shooting in Parkland, Florida, NRA-backed politicians have enabled thoughts and prayers to supersede action.

According to CNBC, the NRA spent over $1 million on candidates for federal office during the 2016 election cycle. "The total spent toward individual candidates compares with $3.2 million on lobbying in 2016 and some $54.4 million on outside spending," reports CNBC. Marco Rubio, the Republican Senator representing Florida, received the third-biggest total from NRA political action committees (PACs). After the Parkland shooting, Rubio doubled down on his long-standing belief that common sense gun laws can't and won't prevent massive gun violence or school shootings. During a CNN Town Hall, where Rubio faced Parkland shooting survivors and grieving parents, the Senator said about a law to ban assault weapons, "If I believe that that law would have prevented this from happening, I would support it."

So, yes, the youth of this nation are all incredibly angry, but they are prepared to turn that anger into action. "Our rage comes from a place of caring for our country and caring for our future, and our voices matter," Sophie tells me. And her friend, 18-year-old Andrea, mirrors her sentiments. "We’re the next generation of voters," she says. "We do know what we’re talking about. We are educated, and we wouldn’t be out here fighting for what we believed in if we weren’t angry enough and if we weren’t passionate enough."

We grew up on it, and a lot of adults they didn’t grow up learning how to hide under desks when they were 5. But we do. — Jessie, 17

Since the February 14 shooting in Parkland, American students have organized a national school walkout, sundry local events and media appearances, and the March 24 "March For Our Lives" protest, which took place in over 800 towns and cities around the globe. Next, they have an April 20 walkout planned. The leaders of the movement have shown both emotion — Emma González cried during the six minutes and 20 seconds she spent in silence on stage at the Washington D.C. rally to commemorate the length of the gun rampage at her school — and a cool-headedness as politicians have closed doors in their faces and resorted to personal attacks. Anger has fueled their efforts, but doesn't entirely define them.

Ashley Virtue, Director of External Relations at the National Conflict Resolution Center, believes school walkouts, national marches, and other calls to action fueled by, in at least some small part, teenage anger is not only beneficial, but healthy for those who are feeling helpless and afraid. "It's OK to be emotional and it’s OK to have feelings about this incident," she tells Romper. "While also being able to have a calm and constructive dialogue about the situation."

Virtue goes on to say that, if done in a right way, students becoming more and more involved in political discourse and calls for change is a positive step in the right direction. "People who are involved in difficult situations are more likely to be a part of a solution if they are involved in the process. That’s just a tenant of conflict resolutions and healthy conversation," Virtue tells Romper. "And if age-appropriate, going to something like a march could also be a really empowering moment for your kids. To feel like they’re in a situation where they don’t have a lot of control, here’s something positive that [they] can do."

Teen anger is often dismissed as "hormones" or rage against whatever system teens are in thrall to, but the anger felt at the March For Our Lives isn't some kind of adolescent melancholy: it has a purpose. It is justified. It is empowering. It is moving the youth of this nation forward — along with them their parents, grandparents, teachers, and neighbors — at a time when teens are being dismissed, disregarded, and deprived of the freedom to go to school without fear of being shot and killed.

"We grew up on it, and a lot of adults they didn’t grow up learning how to hide under desks when they were 5. But we do," Jessie, 17, tells Romper. "They don’t know what it’s like to live in this kind of era." We've made systemic gun violence our children's problem, and the March For Our Lives is proof positive that they're f*cking pissed.

More Like This
13 Is "Too Early" For Kids To Be On Social Media, Surgeon General Cautions
30 Messages To Write In A Valentine's Day Card For Your Child
The Best Travel Tips For Solo Parenting
14 Recipes For Sick Kids When Everyone's Tired Of Canned Soup & Crackers
What Parents Are Talking About — Delivered Straight To Your Inbox