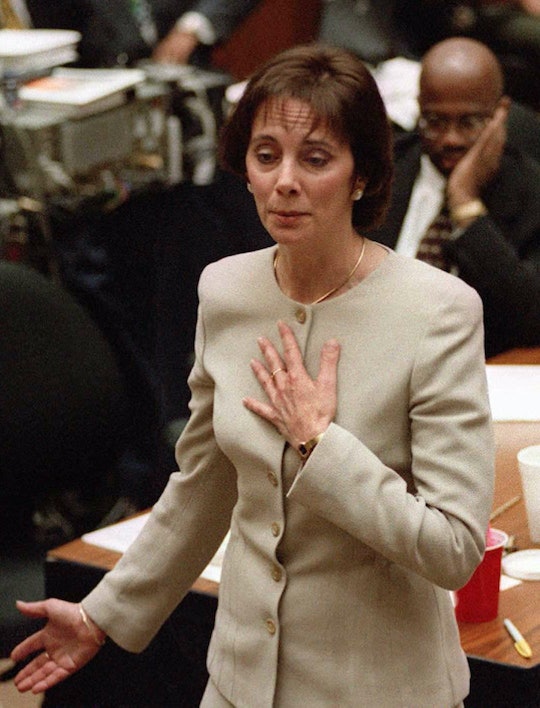 Marcia Clark Quotes On The O.J. Simpson Verdict Prove It Was "Physically Painful" For The Lawyer

American Crime Story: The People v. O.J. Simpson concludes with the closing arguments of the lead counselors on the case — Johnnie Cochran, Christopher Darden, and Marcia Clark — followed by the verdict that sent shockwaves through a nation watching on TV at home. But what did the lead prosecutor think of losing the so-called "trial of the century"? Marcia Clark quotes on the O.J. Simpson verdict, which she has been fairly open about giving, unlike other officers of court present during the trial, reveal just how devastated she really was to see her case crumble.

"Please don't let this make you lose faith in our system," Marcia Clark implored the public after the verdict was read, and O.J. Simpson was acquitted in 1995.

In an interview that aired almost 20 years later, Clark told Dateline of the not guilty verdict: "It felt horrible. It was physically painful. That was not justice. And I thought of Ron [Goldman] and Nicole [Brown Simpson], and I thought, this is wrong. It's so wrong."

The People v. O.J. Simpson does a great job of showing us how the prosecution damned themselves from day one, believing their evidence was incontrovertible, and failing to foresee a defense that hinged on racial tension between black Americans and the police, and a corrupt police force — both of which were apparently true — instead of a case that focused on the murder itself.

As for the monumental error of having Simpson try on the gloves in front of the jury — gloves that didn't fit and which certainly offered reasonable doubt that he committed the crime — Clark said that she didn't blame her second chair Christopher Darden for going ahead with the stunt.

"If that lost the case for us, we were never going to win anyway," she said.

After the verdict came down, Marcia Clark resigned from the District Attorney's office and took some time off, eventually finding her way back to her initial dream of crime writing.

"I was exhausted. I was physically and emotionally drained," she said this past March on Dateline NBC. "It was a tough year and a half of feeling kind of battered on all sides and I really just needed to recover. And then I just kind of felt like, 'I don't need to do this anymore.'"

In another recent interview with People, Clark revealed her surprise that murderers, and especially racially-charged police shootings, continue to be acquitted, even if there's video tape of the incident:

"I thought we would be better by now, but I have really been devastated by the past several years and all these police shootings and cases like Trayvon Martin's," she says. "Police were not even going to arrest [Martin shooter] George Zimmerman, which drove me crazy. These things are on tape and there is no question about it being a good or bad shoot. It was a bad shoot."

"It does make me wonder," she says. "Given all we've seen now, would we obtain a different verdict today in the Simpson case? I don't know. I don't know."