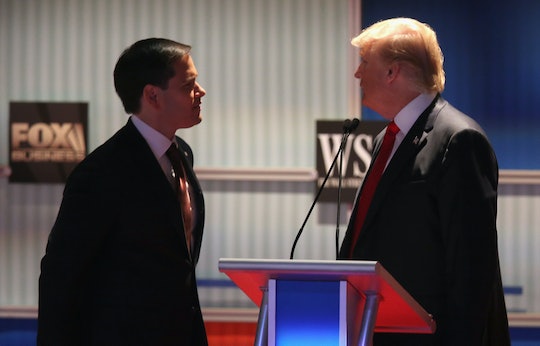 Marco Rubio Was The GOP Debate Audience Favorite, & It's A Sign The Party Should Probably Take Him Seriously

Though Marco Rubio's campaign is run on leaner funds than that of the GOP front runners, his presence was undoubtedly felt at the Republican Party Debate held in Milwaukee tonight. Still fueled by his strong performance in last month's CNBC debate, Rubio's momentum has yet to slow, and it was evident when the crowd cheered Rubio's opening comments. His opening remarks centered around protesters pushing to raise the minimum wage (right outside the building, no less) and garnered the loudest support from the audience.

Rubio has recently seen a rise in the polls, reaching 13 percent in the Iowa caucuses with 50 percent of caucus-goers still undecided. Though his momentum seems to be gaining, his lean campaign has hardly aided in his increased support. Now is not that time to play coy with his competitors, as the recent accusations aimed at Ben Carson seem to mark the official beginning of the mud-slinging.

Thus far, Rubio has appealed to the working class, playing on the heart strings of the middle and lower class with the tales of his family's blue collars and humble beginnings. When asked if he would raise the minimum wage his response, in short, was no. He states that a raise in minimum wage would create a reduction in jobs.

The dissimilarities between Rubio and his opponents do, in fact, revolve around his humble beginnings, which seem to have also influenced his campaign strategies. And though his avoidance of mud-slinging may be well-intentioned, now is not the time to go soft on the more belligerent opponents, such as Trump and Bush. It's time for Rubio to roll up his sleeves and get in the game if he wishes to carry this momentum forward and be a serious Republican contender.

It wasn't just the crowd that loved Rubio on Tuesday night. Twitter loved him, too:

He's come a long way from that dude who really needed water.