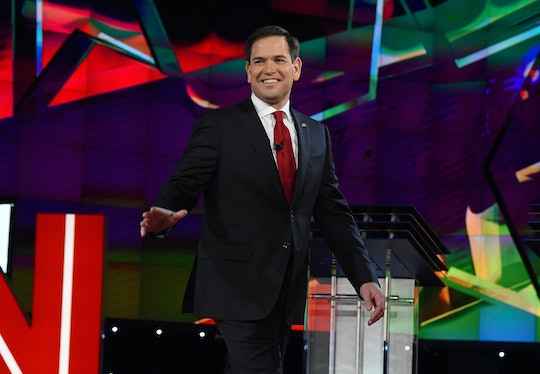 Tuesday's GOP debate on CNN was a big deal for both Texas Sen. Ted Cruz and Florida Sen. Marco Rubio, who have slowly filled second and third places behind Donald Trump in national approval polls, according to Politico. Rubio, who's in in third place, needed to prove that he could draw voters from the far right rather than just moderates. Rubio's closing statement at the CNN GOP debate attempted to cement him as a serious contender against Cruz, who was better swaying the Tea Party vote.

Prior to the debate, the Atlanta Journal-Constitution said Rubio was the candidate for Republicans who "fear Donald Trump and hate Ted Cruz." By this, the paper means that Rubio wanted to cater to Republicans who hate establishment candidates like Cruz (who is widely supported by the most conservative conservatives), and also people who think Trump takes anti-establishment a bit too far. Trump has gone about as anti-establishment as you can get in the last few weeks with calls to leave the Republican party and comments that we should ban Muslims from entering the U.S., and Rubio wanted to separate himself from that kind of political hyperbole. And Rubio's closing statement at the CNN GOP debate made it clear he is doing just that.

Thank you. As we near the end of this year, we enter one of the most important elections in a generation. For what's at stake in this election is not simply what party is going to be in charge, but our very identity as a people and as a nation. For over 200 years, this has been a special country — a unique place where anyone from anywhere can achieve anything. But now millions of Americans feel like they're being left behind, insecure in their future and unsafe in the face of terrorism.

This election is about electing a president that will restore our economic vibrancy so that the American dream can expand to reach more people and change more lives than ever before, and rebuild our military and our intelligence programs so that we can remain the strongest nation on Earth.

Tonight I ask you for your vote. If you do this, we will rebuild this country, and together we will usher in a new American century, the greatest era in this history of this great land.

We will have to see if the polls agree.