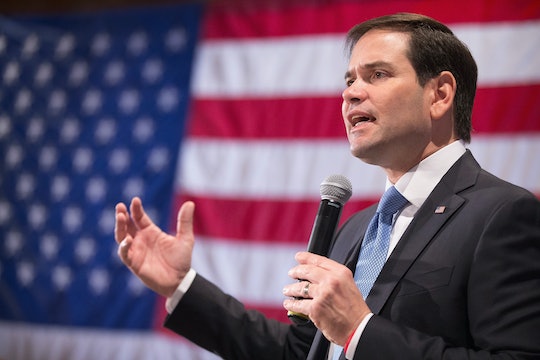 Marco Rubio's Comments On Race Are Actually Pretty Refreshing, But They May Not Do Much To Earn Him The Nomination

It's hard to forget some of the more controversial things Florida Sen. Marco Rubio has said in his run for the Republican presidential candidacy so far — especially regarding highly contested issues. But he seems to have taken a bit of a turn at Wednesday night's Republican town hall, the first of two moderated by CNN's Anderson Cooper, which also featured Ben Carson, and Texas Sen. Ted Cruz. With Rubio, Cruz, and the somewhat irrelevant Ben Carson on stage, it was bound to be an interesting night — and let's be real, it was really just a discussion between Rubio and Cruz. One of the most interesting points of Wednesday night's event, however, was Marco Rubio's surprising comments on race.

No, not his negative rhetoric about Cuba, but rather the following claim. During the event, Rubio said this in regards to racism and the sentiment among African Americans in the United States today:

"If you agree with them or not, if a significant part of the American family believes that they are being treated differently than everyone else, we have a problem, and we have to address it as a society and as a country, because I do not beleive we can fulfill our potential as a nation unless we address that."

In other words, Rubio apparently thinks it is important to address Americans' concerns about race — at least when it comes to African Americans. But let's not forget, the Republican South Carolina primary is on Saturday, and African Americans are expected to make up at least half of the state's electorate — many of those voters, I might add, support Hillary Clinton. If Rubio has been largely mum on the subject of race in American until now, other than his occasional avoidance of discussing his past support of amnesty for undocumented immigrants, why is he bringing it up so suddenly?

Interestingly, the Cuban-American senator also gave a brief speech about Cuba, which ended up being a bit more negative. He did speak a bit on his childhood, and noted that, although he may have been made to feel "different" as a child from his American friends, his parents "never raised [him] to feel that [he was a] victim." Rubio also spoke negatively about President Obama's announcement to visit the island nation next month and said that if he were president, he wouldn't travel to Cuba unless it were a "free Cuba."

Rubio has a spotty record on race and immigrant relations, at best. Although Rubio supported a path to citizenship during his 2010 race race for Senate, when recently asked by Fox News' Megyn Kelly about his stance, Rubio denied supporting "blanket amnesty."

Regardless of whether you think Rubio is just trying to play the cards right — or really is having a change of heart when it comes to the important of race relations in America — there's only one Republican leading the polls in South Carolina just days before the primary, and that's Trump. No matter how much backtracking Rubio does, perhaps hoping to garner both the youth and minority vote, it's not going to be enough to beat the billionaire with such a short amount of time left in the game — even if his comments put him head and shoulders above his competition in many other respects.