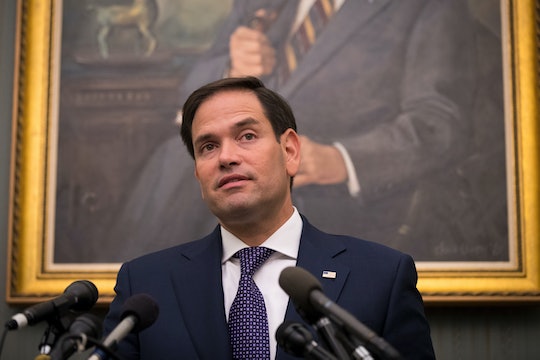 Most reasonable Americans agree that it would be nice if we joined the rest of the industrialized world and started being more supportive of working parents, but boy is it hard to get anyone to come to a consensus on how exactly we should fund it. For example, Florida Sen. Marco Rubio unveiled his paid family leave plan this week, with the support of Missouri Rep. Ann Wagner, and the USA Today op-ed that the pair co-authored to introduce the bill contains some real head-scratching rationalizations for the plan.

In February, President Donald Trump's budget proposed funding six weeks of paid leave through unemployment insurance. The idea was widely panned. According to CNBC, the plan excluded the majority of workers who take leave for medical reasons, it only covered half of workers' federally guaranteed 12 weeks of leave, it would have provided only about a third of workers' usual pay, and it would have raised taxes. While Rubio's plan has some big differences from Trump's, it's still likely to be unpopular with many of the people it's purported to serve. Want proof? He's got the approval of "assistant to the president" Ivanka Trump, who, despite "architecting" the book Women Who Work, has a startlingly tenuous grasp on the needs of the average working woman.

Social Security is premised on the assumption that it is more important for workers to have their money when they are older than when they are younger. But many new parents understandably might decide that having 12 weeks of paid leave to care for their new child is worth a short deferral of their retirement benefits.

First of all, financial experts advise saving for retirement first, since younger workers have any number of potential income sources while retired people have very few options (it's hard to get a loan when you have no job and a limited life expectancy). And while the Independent Women's Forum might sound like a fine organization, it was founded by conservative activist Ricky Silberman, whose frustration over widespread public support for sexual harassment victim Anita Hill in the early '90s drove her not only to help edit a scathing takedown of Hill, according to the Washington Post, but to create an anti-feminist network. Silberman has since passed away, but the group's openly retrograde positions on a variety of social issues are as strong as ever.

Rubio and Wagner's op-ed laments that, "Falling rates of marriage and childbirth ... making young families socially and financially insecure," which, try as I might, I just can't seem to wrap my head around. People are poor because they're not having kids? And they're "socially" insecure because they wish they had more, or something? Just, nah. Rubio and Wagner also criticized European-style proposals that would support paid leave via increased taxes or employer mandates, claiming that not only would such plans "cut the pay and employment of the very people we want to help," but also "make families of all shapes and sizes subsidize one parenting model over all others," meaning that if Jared Kushner and his wife can afford to cover their own parental leave after having a kid, they shouldn't be expected to pay a cent toward anyone else's, I guess.

"In exchange for delaying their retirement by three to six months," Rubio and Wagner wrote, "parents would receive a benefit roughly equal to the amount they’re giving up later." The benefits would also be transferable between spouses, and available to stay-at-home parents, because — this one's a doozy — most of them probably had jobs at some point in the past, and might one day work again, so, technically, choosing to stay at home counts as a super-duper extended leave of absence from the workforce. Say what? "The financial constraints workers face in the first few weeks after having a child and those after turning 65 years old are not equal," the op-ed concludes, and on this, we're in agreement, although I get the feeling we're talking about two completely different things. This plan would force American workers to gamble on their future financial stability in order to start a family, and that's not fair to anyone.