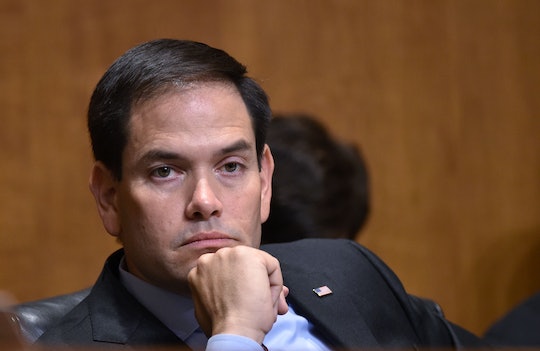 After the shooting in Dallas late Thursday night, many Republicans were quick to politicize the incident, along with the Black Lives Matter movement, and point fingers towards President Obama. But not everyone. In fact, Marco Rubio's statement about the Dallas shooting and police brutality was shockingly on point and measured. Rubio spoke on Friday at a press conference in Doral, Florida. He began by saying that anyone who's not African American will "never fully understand the experience of being black in America, but we should all understand why our fellow Americans in the African American community are angry."

Rubio then moved on to discuss the specific videos of Philando Castile and Alton Sterling this week, while acknowledging that Black Lives Matter is about more than a few incidents. "Despite decades of progress on many fronts, millions of our fellow Americans feel they are treated differently, and they are scared," he said.

Rubio laid out the the foundations for Black Lives Matter better than almost anyone I've seen yet — which is is pretty surprising. But he didn't just talk about how Americans need to acknowledge the fear of law enforcement. He also spoke to how dangerous police officers' jobs are and how human experience and error plays into their job. And also about how the public discourse surrounding these shootings is divisive and unproductive.

Rubio then spoke about taking action, instead of fighting amongst ourselves. He said that the tragic incidents over the past week speak to "a terrible and growing problem. A growing and festering cancer in our country that is dividing us against one another in ways that we have not seen in half a century." He called on people to come together, instead of apart. He said:

We can feed this anger through posts on social media and careless words. We can stoke the fear by choosing sides and squaring off. We can choose to continue to divide ourselves along the lines of class, or race, or partisan politics. ... We Americans are a complicated, imperfect, and diverse people. We most certainly don’t see eye to eye on everything, and not everyone is pure of heart. But I truly believe that the vast majority of us all want the same things.

His remarks on Friday should be welcomed, no matter what you think of his politics, if only for being a measured take on the issues and also for taking some responsibility for the socio-political climate that could lead to the shootings of Philando Castile or those killed in Dallas on Thursday. Ben Carson, for example, blamed President Obama for "divisive language." Republican frontrunner Donald Trump posted a video where he spoke about solidarity with police forces, since they prevent America from devolving into "total chaos" (cue the movie trailer music).

On social media, the way some politicians took the tragedies as a chance to point fingers was disheartening to say the very least. Donald Trump Jr. even retweeted a controversial ex-congressman who wrote that activists were calling for the death of cops altogether, which is not only not true at all, but adds fuel to an already very dangerous fire.

Given that kind of rhetoric, Rubio has a point when he says that many in public life should think about the things they say out loud and to examine "whether [what they say] contributes to the nation moving forward or whether sometimes [they're] unnecessarily pitting people against each other."

Rubio is running for Senate again this year and like many other politicians, he could have used the ambush in Dallas and the recent shootings of black men to get his base all amped up, like many others are seemingly doing. Instead, he stepped back and saw the whole, complicated mess and called on Americans to come together instead of drifting even further apart. No matter what your politics are, that's something to be respected.