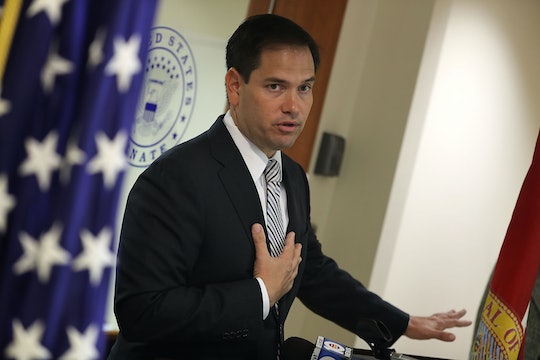 There's still a palpable, political wake from the shooting in Dallas, Texas,f on Tuesday night. Republicans and Democrats alike were quick to offer opinions, admonishments, and spin. But, there were some who spoke out against politicizing the event. Surprisingly, former presidential candidate Marco Rubio's statement on the Dallas shooting shows that police brutality isn't a partisan issue.

Rubio held a press conference shortly on Friday in Doral, Florida, according to the Miami Herald. Unlike many of his fellow Republicans, he offered his sympathy to the people of color at the event and those across the country mourning the deaths of Alton Sterling and Philando Castile. He said that anyone who isn't black will "never fully understand the experience of being black in America, but we should all understand why our fellow Americans in the African American community are angry."

He didn't stop there. According to a press release that followed his conference, he acknowledged the importance and meaning of the Black Lives Matter movement. He said that "despite decades of progress on many fronts, millions of our fellow Americans feel they are treated differently, and they are scared." He went on to discuss the history and lineage of the BLM movement, from the Civil Rights Movement, to Trayvon Martin, to the present. Coming from him, the scope of knowledge was exceedingly impressive.

Like any good politician, though, he offered both sides. He discussed the risk police officers take on and how the vitriolic criticism of them is hardly productive for solving a systemic problem. Finally, and most rousingly, Rubio made a call to action. He acknowledged the tragedy of the shootings, but said they were indicative of a larger "terrible and growing problem." Or, in more graphic terms, he said it was a "growing and festering cancer in our country that is dividing us against one another in ways that we have not seen in half a century." He pleaded with his listeners to come together, rather than fight against each other, on and offline. He said:

We can feed this anger through posts on social media and careless words. We can stoke the fear by choosing sides and squaring off. We can choose to continue to divide ourselves along the lines of class, or race, or partisan politics. [...] We Americans are a complicated, imperfect, and diverse people. We most certainly don’t see eye to eye on everything, and not everyone is pure of heart. But I truly believe that the vast majority of us all want the same things.

Regardless of his voting record and platform, the measured response was a welcome one, especially given the incendiary nature of many politicians' responses. Rubio seemed to recognize that police abuse of force is a form of state tyranny, which is exactly what the Republican Party stands so firmly against. But he also realized that police officers are very often doing their best to know their communities. After his failed presidential bid, Rubio is running for Senate again, according to CNN. He's already beginning to set himself apart from the Republican field; here's hoping that others in his party begin to take his wider, more empathetic view (especially the Republican presidential nominee).