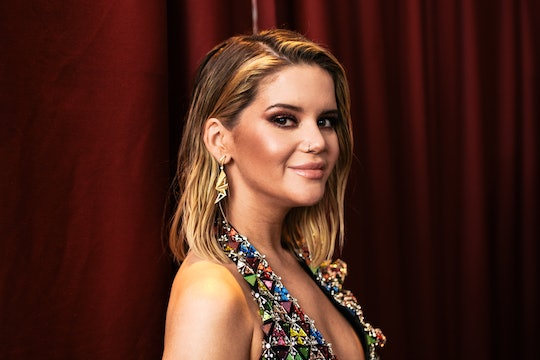 It looks like the country music scene is about to get a bit bigger. That's because Maren Morris is pregnant with her first child, amazing news she revealed Tuesday via Instagram. And not only did Morris provide a hint about the baby's due date, but she also revealed their sex. Squee!

Morris, who married her husband Ryan Hurd in March 2018, took to Instagram to share the thrilling news. "The irony is just too rich that after a year of living in the 'GIRL' headspace, the universe would give us a baby boy to even things out," she captioned a stunning maternity shot with Hurd by her side.

As for reactions to the news, Morris' friends took to the comments section to wish her well.

It's not yet clear what Morris will name her little guy, but it's obvious she has been planning her pregnancy for a while now. Back in August 2018, for instance, the singer joked to a fan who asked when she'll have a baby: "I literally have it blocked out on my calendar next year."

Ha! You can't knock Morris for not being organized.

Then, in January 2019, Morris gushed about the possibility of having kids with her beloved husband. “If you’re gonna get married, you have to have those talks beforehand anyways, and I definitely know that I want a family, and he would be such an amazing dad; he’s such a kid himself,” she told People. “I love his family, and he loves my family, so we’ve definitely had those conversations, and they’ve been really fun and exciting.”

Hurd shares her excitement, as he captioned a sweet maternity shot of the pair: "MY BOYS CAN SWIM. BABY BOY HURD 2020! Look at her...cannot believe this life with this girl. Also, thank you George Constanza for this caption that I’ve been sitting on my entire life..."

And it looks like Hurd also shared his enthusiasm on Twitter, spilling the beans on when Morris will give birth. "See you in March, baby!" he wrote.

In a sweet twist, March is when Hurd and Morris tied the knot. This means they'll become parents on their first wedding anniversary, which is so special.

Additionally, it sounds like Morris has found her prefect match with Hurd, who she recently raved about in an interview. "Being married for the past year has also helped me figure out more who I am independently," she told Playboy. "For example, my husband is very much a feminist, and I've never really done anything that's freaked him out. He has always been accepting. Even with Playboy, he was like, 'That's really hot.'"

What's more? Morris will become mom just one month before she turns 30, making this next decade especially exciting for her. Talk about the perfect birthday present. And on that note, congrats mama!