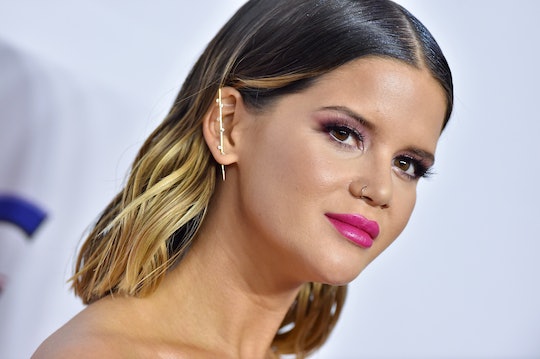 Country music sensation Maren Morris first announced her pregnancy in October, revealing she's expecting a baby boy with her husband, Ryan Hurd, in March. Morris later shared an adorable sonogram of her little one, which was a big hit with fans wanting to know more about her journey to motherhood. And if you're excited about the impending arrival of baby Hurd, there's a good chance you'll appreciate Maren Morris' hilarious pregnancy update.

Morris is officially in her second trimester, which can be a time when reality sets in you're about to be a parent. Whether your bump is beginning to show or you're dealing with less than fun pregnancy symptoms, hitting the 4-month mark is a turning point for many. This sentiment is true for Morris, who is on vacation in Hawaii at the moment. "Someone send a good virgin colada recipe. #2ndTrimester," she captioned a shot of herself lounging on a pool chair.

And did you notice the glass of water on the table next to Morris' chair? It looks like this will be the singer's drink of choice for the next four or five months.

One commenter came to Morris' rescue, however, suggesting the star try this tasty recipe. "Frozen pineapple, coconut milk, and maple syrup," the fan suggested. "Throw these in a blender, and you’ve got a tasty signature drink in no time."

Drinks aside, many fans were impressed by how effortlessly Morris is rocking her bump.

"Look at that pretty belly!" someone said. "GIRL you are glowing."

Another person commented: "Nice baby bump and you look so beautiful!"

And someone made a joke about Morris' past trip to wine country, writing, "First you come to wine country pregnant, and now Hawaii...you are REALLY testing yourself :)"

Morris isn't too far away from giving birth (I have a feeling these next months will fly by, given how busy the singer typically is), so she should be fine until little baby Hurd arrives. Then she's free to indulge in all the piña coladas she wants. Hang in there, mama!