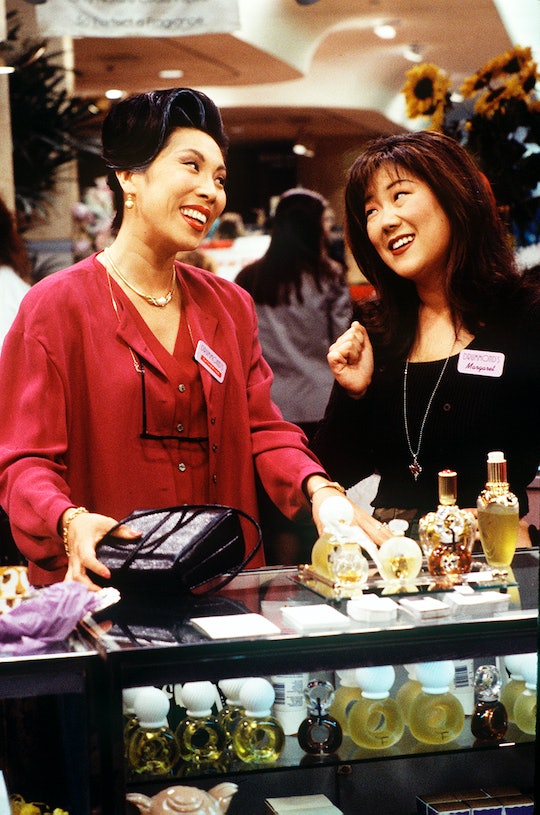 I can only remember two Asian actresses from my childhood that I looked up to — Thuy Trang as the yellow Power Ranger and Jennie Kwan's Sam Woo of California Dreams. I’m optimistic that my 2-year-old will grow up seeing more faces in TV and film that look more similar to her Korean mom’s, as well as blended families that look like her own — but where were they when I was young? The only mainstream show featuring a Korean-American family in the ‘90s that bore any resemblance to mine was All-American Girl starring Margaret Cho. It aired for one season only from 1994-1995 on ABC and, as The New York Times so graciously put, it bombed. Curious to explore this sitcom as an adult to see how exactly my kind were represented, I recently queued up a few episodes of the show to watch. I expected it to be flawed with inappropriate stereotypes and to find myself feeling embarrassed and disappointed, but my reaction turned out to be surprisingly complex.

Context, because it’s important: I’m a second-generation Korean-American woman watching this show in 2019. I lost my mother 10 years ago and I’m now raising a daughter of my own.

First, let me get off my chest that there are, unsurprisingly, aspects of All-American Girl that are particularly cringeworthy: The totally fake Asian accent (not even Korean!) that the mom character, Katherine Kim (Jodi Long), uses while the dad speaks perfectly American English, and the unimpressive acting across the show. But as I watched more of the series, I started to build an immunity to those things that bothered me and I found I really loved the mother-daughter moments throughout the episodes. Again, context is everything, and if I compare this show to my personal upbringing, there are lots of similarities: the mother-daughter dynamic, the clash of cultures, and the plain truth that Katherine Kim is a lot like my real mom.

I know a lot of people probably looked at Katherine and were turned off that she seemed like a caricature, a stereotype of what a real Korean-American mom looks like… and they’re not wrong.

Like Katherine and her daughter Margaret (played by Margaret Cho), my mom and I had a funny, sometimes almost sisterly banter that really manifested once I left for college. We were very close; had mildly stubborn tendencies (read: we were both too stubborn to admit we were stubborn); had a sense of humor about most things; and even when she was in California and I was in New York, we still talked to each other daily. Like Katherine, my mom would’ve preferred that I dated a nice, hard-working, Korean Christian man. And like Margaret, I chose pretty much the opposite: my husband is of Irish and Italian descent and neither of us has stepped foot in any type of church except for weddings and funerals in well over a decade. (He checks the other boxes). They fight about Margaret’s independence and if my mom had had her way, I, too, never would’ve moved out. Katherine tolerates her live-in mother-in-law, as mine did. She’s the matriarch; my mother was, too.

But it’s Katherine’s general personality that is so similar to my mother. I’d say my mom was a little less cynical and grumpy in general, but the jokes, the impatience, sass, standards, and expectations of her children and dreams she envisions for them — those are all my mom. I know a lot of people probably looked at Katherine and were turned off that she seemed like a caricature, a stereotype of what a real Korean-American mom looks like… and they’re not wrong. She favors the eldest son (the ever-obedient cardiologist), she believes that her daughter must marry well to be happy (ideally someone who’s smart, successful, respectful — like her golden-child son), and she has a “Korean mom” accent (never mind it’s completely off).

But for me, this character is so spot on, and she makes me miss my mom like crazy.

It’s unusual for me to see a character that reminds me of my mom on TV. Obviously the fact that there are no other Korean TV moms on American shows is a factor. The only other character that comes close is Mrs. Kim from the Canadian sitcom Mr. Kim’s Convenience Store. When it does happen though (again, this time only being the second), I get very emotional. I laugh because scenes more or less happened to me before, and I feel happy because it’s nice to feel represented and seen. But I also get sad because I have to then re-accept that my mother’s life has run its course, and that she has already missed the big adult milestones of my life (the college graduation, the wedding, the birth of my daughter) and will only miss even more. She even passed before I met my Irish-Italian husband, so when I see Margaret and Katherine in AAG arguing about who Margaret is dating, I can’t help but wonder what my mom would’ve said to me about marrying a non-Christian white guy 11 years older than me. (Sorry, Mike.)

My mother emigrated to the United States in her early 20s and surrounded herself with other Korean-Americans most of whom were also immigrants. Being around like-minded people doesn’t really challenge you, and it wasn’t until my older brother and I started growing up and having conflicting opinions of our own that she had to compromise a lot of her authority, which I know was hard for her.

I wish there were more sitcoms like this while I was growing up, featuring Korean-American women who my mom and I could’ve watched together, identified with, been slightly offended by, but also laughed at.

In the show, Margaret is already 21 and I get the feeling her mom had lost a lot of her “tiger mom-ness” as mine did by the time I was that age. By the time I was in college my mother was not the same person she had been when I was 6, 10, 14… and I imagine the same for Katherine Kim. When I watch the show, I see a woman who has had to reconcile with being the matriarch of the house and at the same time accepting she can’t control everything and everyone as she’d like to. A woman who has to let go of many of the rules that she set up for her daughter who is now an adult. I can’t help but compare all her win-lose situations with those of my mom, who had a lot of similar values — piety, respecting your elders by never disobeying or contradicting them (that extends to your totally immature older sibling because birth order), the measure of success (hint: money) — whether I agreed with them then and now or not. In the end, everything she and my mother did were in the best interests of their children, and those “best interests” were determined by so many external factors (community, upbringing, personal experiences), mixed with their own personal beliefs, made even more complicated because they had to deal with stark cultural differences. No wonder we’re not always on the same page as our parents — what kid grows up in exactly the same circumstances as their parents and thinks exactly like them?

The unfortunate thing is, you don’t realize all the things your parents do you for you, how much they compromise, sacrifice, and even change for the better thanks to you — much less thank them for any of this — until you’re well into your adult years and probably raising a kid of your own.

I wish there were more sitcoms like this while I was growing up, featuring Korean-American women who my mom and I could’ve watched together, identified with, been slightly offended by, but also laughed at. Because as much as I was able to relate to many common issues that were touched upon on mainstream TV shows (bullying, socializing, sibling rivalry), those teaching moments would’ve been infinitely more powerful if they had featured people who looked more like me — I would’ve responded differently and I would’ve felt like it was coming from a place that took into consideration the unique complications that come with being raised by immigrant parents. As fondly as I remember my mom now, our relationship was not without its fair share of struggles. And while we probably would not have dissected each plotline openly if more programs existed — awkward — I think they could’ve at least helped us navigate our own conflicts a little more gracefully. Maybe I would have had a more mature understanding of my mom and let her know I was proud of her and appreciated her when I could have.