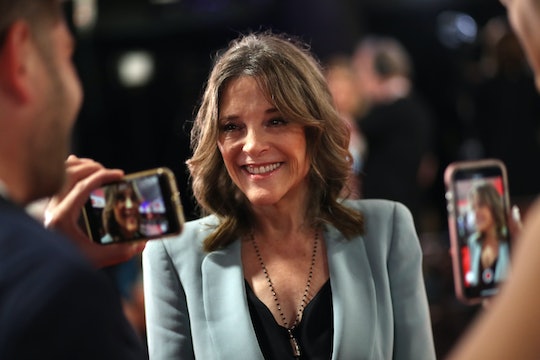 Following the second Democratic primary debate, one candidate, Marianne Williamson, is experiencing some newfound popularity. As interest in her grows, as well as general concerns surrounding the anti-vaxx movement, so too have efforts to evaluate her past comments on a number of issues. Most recently, Marianne Williamson's stance on vaccines has continued to raise questions, spurring the 2020 presidential hopeful to repeatedly defend her views.

Pressed to explain past statements in which she'd reportedly labeled vaccination mandates as "draconian" and "Orwellian" in a recent interview with MSNBC's Ari Melber, Williamson argued it was an "overstatement" to claim she'd "cast skepticism" on vaccines. "On the issue of vaccinations, I'm pro-vaccination, I'm pro-medicine, I'm pro-science," she said.

"On all of these issues, what I'm bringing up — that is very legitimate, and should not be derided, and should not be marginalized, particularly in a free society — is questions about the role of predatory Big Pharma," Williamson continued during the same interview with MSNBC. "This is the issue, when I was a child we took far fewer vaccines. And there was much less bungling, and there was much less chronic illness."

When pressed by Melber to clarify if she was suggesting that "vaccinations are contributing to things being worse now," Williamson pointed to the jump in chronic illness seen after the National Childhood Vaccine Injury Act established a national vaccine program in 1986. However, researchers have repeatedly said that scientific studies don't support the claim that vaccines may cause or contribute to chronic diseases like asthma, diabetes, multiple sclerosis, or chronic arthritis.

Romper's request for further comment from Williamson's campaign regarding her statements and current stance on vaccines was not immediately returned.

In June, NBC News reporter Julia Jester claimed Williamson had leaned in to "vaccine skepticism" while speaking in New Hampshire. "To me, it's no different than the abortion debate. The U.S. government doesn't tell any citizen, in my book, what they have to do with their body or their child," Jester reported Williamson said, adding that vaccine mandates were too "draconian" and "Orwellian."

In remarks to The Los Angeles Times, Williamson confirmed that was what she had said, but stressed she'd misspoke. "I understand that many vaccines are important and save lives," Williamson told The Los Angeles Times. "I also understand some of the skepticism that abounds today about drugs which are rushed to market by Big Pharma. I am sorry that I made comments which sounded as though I question the validity of life-saving vaccines. That is not my feeling and I realize that I misspoke."

However, Williamson's recent interview with Melber isn't the first time she's had to defend or address her past comments on vaccines. For example, she refuted claims she was an anti-vaxxer during an interview on The View in late June. "I am not anti-vaccine," she said on June 20. "I think I misspoke in that one sentence."

The author and spiritual guru went on to argue that "Big Pharma" was currently "so cozy" with both the U.S. Centers for Disease Control and Prevention (CDC) and the Food and Drug Administration (FDA), which led "millions of Americans who are not anti-science and are not anti-vaccine" to "have some deep concerns."

However, when asked on The View if her latest remarks meant she was OK with mandatory vaccines, Williamson deferred. "It's not that now I'm OK. I haven't changed since yesterday," she said. "I misspoke on that one sentence, but I will say this; when I am President of the United States there will be a commission of scientists learning so that the American people see what's going on with these vaccines who are not paid by Big Pharma."

But Williamson's statements on vaccines can sometimes appear contradictory. For example, in 2015, she told Bill Maher that she felt there was "a difference between having skepticism about science and having skepticism about the pharmaceutical industry." In regards to the measles, Williamson told Maher she thought there was "a public health issue that overrides individual liberty here" and noted her child had been vaccinated.

However, she then went on to, without providing proof, allege that both the government and the medical establishment had "suppressed information and withheld information" about vaccines. "The answer is not to tell us we're kooks, but to get their act together so that they are more trustworthy again," Williamson said in 2015.

When her comments on vaccines came under heavy scrutiny in June, Williamson directed those curious about her views on vaccines to her interview with Maher, saying, "Much has been said tonight about my view regarding vaccines. I spoke about it on Bill Maher in 2015 and I feel the same way now."

Williamson's 2020 campaign website does not explicitly mention her beliefs or stance vaccines, though in a July 23 tweet, she wrote, "And I am not an anti-vaxxer."