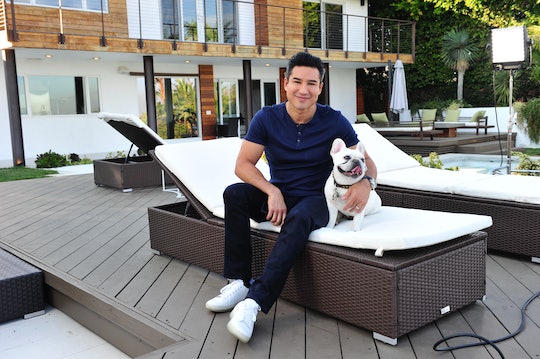 You know how people sometimes look like their dogs? Well, I hadn't realized it before but there is a marked resemblance between Mario Lopez (who you'll recognize from Saved by the Bell, Extra, and more) and his French bulldog, Julio. I'm serious! And it turns out they've both been recognized *officially* for their dazzling smiles and all-around good looks. With Romper, Mario Lopez chatted about the AKC National Championship Dog Show (airing New Year's Day at 6 p.m. on Animal Planet), which he and Julio are helping host along with other celebs and their fur babies.

I first remember encountering Lopez's jaw-dropping dimples when he played a teen on Saved by the Bell way back in the early '90s. Julio, on the other hand, I am less familiar with. But it turns out that in the dog show world, Julio is kind of a big deal. He's retired now, but back in the day Julio was a formidable dog show competitor in the "non-sporting group." Frenchies, like myself, are non-sporting, unlike dogs such as, say, golden retrievers who are "sporting." But Lopez says he didn't get Julio with the expectation that he would become a show dog. Instead, it turns out Julio was such an exceptionally beautiful puppy that show-business chose him, rather than the other way around.

Lopez says that Julio was discovered "like Marilyn Monroe." The dream. According to Lopez, he and Julio, a puppy at the time, were at the dog park one day, when a woman approached them and said that she thought Julio would make a great show dog. "She already did dog show competitions and she happened to have other Frenchies and she thought my Frenchie was really cute I guess at the time," Lopez explains. From there, he says that this Frenchie Fairy Godmother (my words, not his) sort of took over, and Julio's career took off.

When asked what it takes for a dog to make it in the dog show world, Lopez replies, "be beautiful," adding that Julio is "incredibly handsome." Fair enough. And you can't deny, as far as French Bulldogs go, Julio is quite a specimen.

He may be just as cute now as he was in his prime, but these days, Julio goes to dog shows in a strictly supportive capacity. His days as a competitor are all over. But he's not the only celeb pup who will be in attendance to support their own breed. Other celebrity guests at the AKC event are: McKenzie Westmore and her greyhound "Asha," Brett Young and his Chihuahua "Oscar," Shawn Johnson and her Golden Retriever "Nash," Cameron Mathison and his Doberman "Red," Kellan Lutz and his Australian Shepherd "Koda," and Marcus Allen and his Soft Coated Wheaten Terrier "Zoey."

Personally, I have no idea how anyone could judge a dog based on anything other than snuggle-ability, but someone has got to do it, it seems. To be honest, I don't think I actually care that much which dog or which breed or which group wins this thing — but I will definitely still be watching.