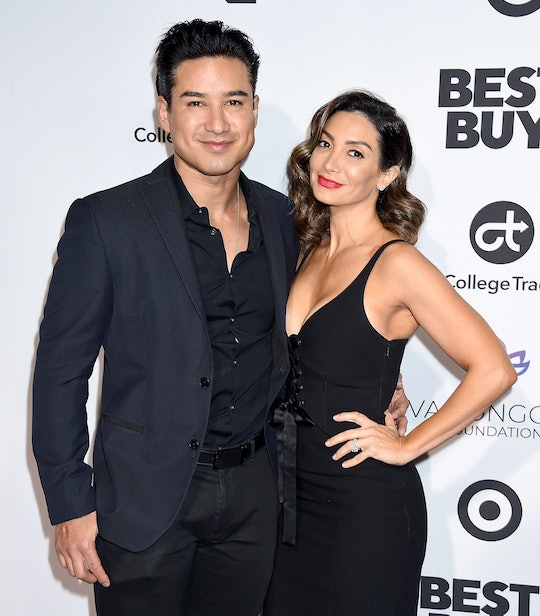 Well, it looks like congratulations are in order for a former Saved by the Bell star. That's because Mario Lopez welcomed his third child with wife Courtney, as he shared on Instagram on Monday, July 8. And the first photo of their newest addition is basically the sweetest thing ever.

Unsurprisingly, Instagram was over-the-moon for the Extra host and his family. One follower wrote, "Congratulations!!!!!!!! And how does mrs Lopez look so stunning after giving birth?"

Another Instagram user commented, "Oh my gosh!!!! Congrats you guys — and I see those little dimples already!! So cute! "

Other fans loved the fact that Lopez spilled all the deets in one, epic Instagram post. One person wrote, "Now this is how ya do it! Announce & give us the name & the pics! So sweet! I spy...dimples!! "

Check out baby Santino's irresistible dimples for yourself!

The couple announced in January that they would be adding to their family, according to Us Weekly, and they did so with a pregnancy reveal via Instagram. “Alright, Lopez fam bam update for ya,” Lopez said in the video clip alongside his wife and their two children, Gia, 8, and Dominic, 5. “I’m crazy with work as usual. Mrs. Lopez, what about you?”

“I’m having a baby!” Courtney chanted while lifting up her shirt to show her bump. Too cute, right?

Lopez considered this third pregnancy a "miracle," according to People. “If it didn’t happen, it wasn’t meant to be. Not part of God’s plan. We have one of each,” Lopez told the publication shortly after the reveal in January. “But it got in there! It snuck in, towards the end.”

In case you were wondering, the couple decided early on that they would be waiting to find out the sex of the baby. “We’re pretty old school, you know, it being the tie-breaker,” Lopez told People. “It doesn’t matter, to be honest, as long as it’s healthy. We’re just very excited. The gender reveal will be when it’s born!” And as it turned out, they kept true to their word.

Although they didn't know beforehand whether the baby would be a boy or a girl, the Lopez family put a lot of thought into names either way. In April, Lopez shared that his son and daughter were bickering over the potential names for their sibling, telling Us Weekly: “They’re both fired up! We have some contenders. [The name is] definitely going to be Italian, definitely going to be Catholic. That we know.”

Thankfully, it seems Courtney had a fairly smooth third pregnancy. “She’s been a trooper. She’s been very fortunate that she hasn’t struggled, hasn’t gotten sick," Lopez told the publication at the time. "She looks great pregnant ... She wears it well.”

I'm so glad to hear that everyone is doing great after baby Santino's arrival. Hopefully, Mario and Courtney Lopez will be able to take some time off to bond with their new little one over the summer. I can't say for certain, but I think there's a good chance they'll have two eager helpers willing to give them a hand with the new bundle of joy. Congrats to the Lopez family!