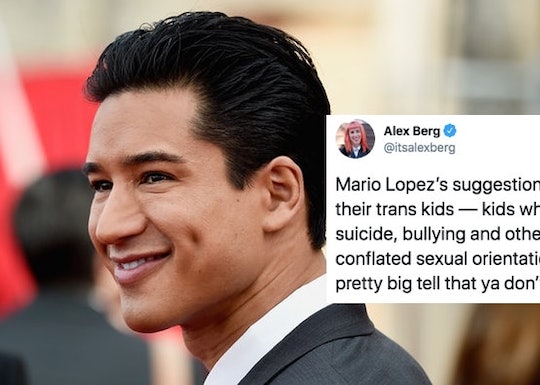 More than a month after appearing on The Candace Owens Show, one celebrity dad has found himself in the hot seat for remarks he'd made about parenting and gender. Mario Lopez's comments about parents supporting young transgender children recently resurfaced, sparking a heated backlash on Twitter. Back in June, the actor and television presenter had told host Candace Owens that he thought it was "dangerous" for parents to allow young children to determine their own gender.

"Please don't lump me into that whole [group]," Lopez said when Owens brought up what she characterized as a "weird trend" in Hollywood of celebrities speaking about their children "picking their gender." Lopez went on to say he was "trying to understand it" but was "kind of blown away."

"Look, I'm never one to tell anyone how to parent their kids obviously and I think if you come from a place of love, you really can't go wrong," Lopez, who became a father for the third time earlier this month, said. "But at the same time, my God, if you're 3 years old and you're saying you're feeling a certain way, or you think you're a boy or a girl or whatever the case may be, I just think it's dangerous as a parent to make this determination then, well, OK, then you're going to a boy or a girl, whatever the case may be."

"It's sort of alarming," Lopez continued. "And my gosh, I just think about the repercussions later on."

Romper has reached out to Lopez's publicist for comment, but did not receive an immediate response.

However, in making his argument, Lopez appeared to confuse gender identity with sexual orientation. "When you're a kid ... you don't know anything about sexuality yet," he said. While gender identity refers to how an individual perceives their own personal gender, sexual orientation refers to who an individual feels sexually or romantically attracted to.

Despite the confusion, Lopez ultimately appeared to disagree with parents who allowed their children to make declarations about their gender identity.

"I think parents need to allow their kids to be kids but at the same time, you gotta be the adult in the situation," he told Owens in June. "I think the formative years is when you start having those discussions and really start making these declarations. It's way too young. I just personally think it's way too young."

The actor was also quick to say his brood "don't kick it with those kids" when asked about play dates with children who are allowed to "pick their gender."

Although Lopez's interview with Owens happened more than a month ago, his comments have only recently sparked criticism online. "Mario Lopez's suggestion that parents ought not accept their trans kids — kids who face staggering levels of suicide, bullying and other hurdles — is cruel," LGBTQ journalist Alex Berg tweeted. "He conflated sexual orientation and gender identity, which is a pretty big tell that ya don't know anything about this."

Others questioned his involvement with GLAAD, an LGBTQ media advocacy group, in light of his recent comments. "It's unfortunate that someone who is so involved with @GLAAD like @MarioLopezExtra would be so misinformed about #trans kids," Alexandra Halaby tweeted.

One parent on Twitter countered Lopez's comments with the argument that parents can often tell the difference between a phase and struggling to live in the wrong body. "Of our 5 kids, 2 are queer," Holly Figueroa O'Reilly tweeted. "They both came out in their early teens but we knew who they were way, way before then. Parents can tell the different (sic) between a 3 year old (sic) who pretends to be another gender for fun and one who feels they are living in the wrong body. STFU Mario Lopez."

Even LGBTQ advocacy groups have weighed in on the topic. "Mario Lopez's comments are dangerous to the safety and well-being of LGBTQ youth, especially trans children who deserve to be loved and accepted for who they are," Human Rights Campaign wrote in a tweet posted Wednesday.

Others, like former NFL player Wade Davis II, encouraged the actor to educate himself on why his comments could be considered harmful to transgender individuals. "#MarioLopez should read more -- being #Trans is about IDENTITY not sex," Davis tweeted. "And trans folks understand that they are being treated differently from how they identity btw the ages of 3 & 5 & adults force gender on kids from birth. @MarioLopezExtra when all else fails -- READ."

Queer Eye star Karamo Brown even offered to lead the conversation. "I'm disappointed to read @MarioLopezExtra comments about parent's who support their child's openness about their gender identity," Brown wrote on Twitter. "As a social worker I am trained to identify abuse or neglect of a child. Healthy & safe dialogue w/ kids is neither abusive, neglectful or 'dangerous.' I don't think @MarioLopezExtra should be 'canceled.' But I do believe he should be given the opportunity to learn why his comments are harmful to trans youth and their parents. Mario, I’m ready to talk when you are."

According to the Trevor Project, research has shown that LGBTQ youth are often found to have a higher risk for suicide than their non-LGBTQ peers. As a result, advocates argue that parental support is vital for transgender and gender-expansive youth, no matter their age. And while Lopez has yet to issue a public statement on the backlash his comments have received, many on Twitter urged the father of three to rethink his stance on supporting a transgender or gender non-conforming child.