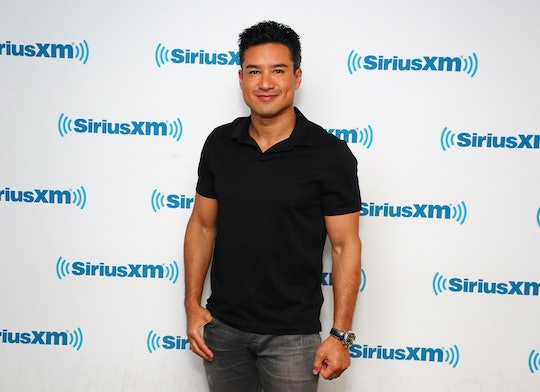 Mario Lopez's three young kids will never understand how huge Saved By The Bell was when it aired on TV just 30 years ago. But just because they weren't alive back then doesn't mean they can't appreciate the show any less. Of course, Mario Lopez's kids dressed as the Saved By The Bell cast and they pulled it off perfectly. I mean, how could they not when their dad is A.C. Slater himself?

Lopez's kids should have "won" Halloween 2019 with their adorably coordinated and well done costumes paying tribute to their old man himself. On Thursday, Oct. 31, Lopez took to Instagram where he shared the sweetest photo of his three kids — 9-year-old daughter, Gia, 6-year-old son, Dominic, and 3-month-old son, Santino — and family dog, Julio Cesar Chavez-Lopez, dressed up as characters from the beloved show that made Lopez the icon that he is today, according to Entertainment Weekly.

The three kids look like they could fit right in at Bayside High — give or take a few more years. In the photo series shared to Instagram, Gia gives her best Bayside High cheerleading squad sass, while Dominic rocks Zack Morris' classic acid washed jeans and larger than life cell phone. But Santino's costume is the best, wearing his own miniature hand knit A.C. Slater wrestling costume and mullet wig.

Although his kids may never know what it's like to have to use a cell phone that large, they embody their costumes so well. But when your dad is A.C. Slater, it's impossible not to embody the characters well. Saved By The Bell is in their blood.

Needless to say, people are freaking out over these costumes in the comments of Lopez's Instagram post. But who wouldn't freak out? They have every part of it down — from their costumes, to their attitudes, to the perfect hair.

"ARE YOU KIDDING ME!!!!," actress Sarah Shahi wrote. "Amazing. I'm dying over the little man in the middle."

Everyone else is, too. Although Lopez told Romper in June that Dominic is "a mini-Mario", Santino's super sunny disposition (and fake mullet) in the photo is a dead ringer for his dad. He could be following in his dad's footsteps within a matter of time. In July, just weeks after Santino was born, Lopez told People that Santino was the "most chilled out baby so far". "Which means he's probably going to save it up for later on, so he'll explode with all of his energy."

But that isn't to say that his kids are fans of the show — as it turns out, they might need a few years to truly appreciate it for all that it's worth. During an August 2018 appearance on The Ellen Show, Lopez explained that his kids have seen Saved By The Bell once or twice, but aren't as into it as expected, according to Us Weekly.

"My kids have given it a shot — not feeling it," Lopez told the show's host, Ellen Degeneres, according to Us Weekly. "They're like, 'Daddy, why is your hair like that?'"

But that was a year ago, and a lot has likely changed since then. Judging from these photos, his kids should have so much love for Saved By The Bell and Bayside High by now. Or they will learn to have so much love for the show, eventually. Whatever the case may be, they killed it in the costumes.