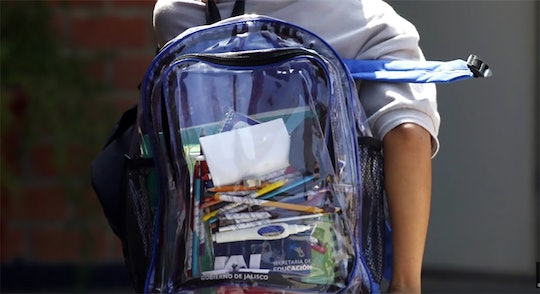 A month after the mass shooting at Marjory Stoneman Douglas High School in Parkland, Florida, on Feb. 14 that killed 17 people, the school's superintendent issued a new directive on Wednesday about student backpacks. Marjory Stoneman Douglas High School students will now be required to wear clear backpacks at school, The New York Times reported. Although the school district appears proud of the move, many Parkland shooting survivors and gun violence prevention advocates took to Twitter on Wednesday night to criticize the idea as ineffective and tone-deaf.

Two students at Marjory Stoneman Douglas High School were arrested on Tuesday for allegedly bringing knives to school, according to CBS News. As if these incidents weren't frightening enough, a Douglas student claims they found one of the school's patrol officers, Deputy Moises Carotti, asleep in his patrol car on Monday evening. The rash of security concerns is supposedly what prompted the school's superintendent, Robert Runcie, to issue the change about clear backpacks. Broward County Sheriff's Office did not immediately respond to Romper’s request for comment.

“Over the past several weeks, we have received many inquiries regarding our District’s efforts to fortify the Marjory Stoneman Douglas campus and expand safety protocols at the school," Runcie said in a portion of his letter sent home to Douglas parents on Wednesday, according to the Miami Herald. “We want to assure you that the safety and security of our students and employees remain our highest priorities.’’

So, in an effort to "expand safety protocols," Runcie is requiring that all students wear clear backpacks at school starting on April 2, after spring break. If a student can't afford to buy a clear backpack, the school district will provide the new bag for free. Runcie did not immediately respond to Romper’s request for comment.

Additionally, Runcie issued a requirement that all students must carry ID badges with them at all times during school hours.

But many people don't agree with Runcie's view that clear backpacks will make Douglas more safe. In fact, many Parkland shooting survivors believe the change is useless in preventing gun violence.

Other people agreed with the students' arguments, citing personal anecdotes and common sense.

The frustration about the clear backpacks comes just days before March For Our Lives protests will take place in major cities across the United States on March 24. March For Our Lives, a protest designed to draw awareness to gun violence in the U.S., will feature Parkland shooting survivors at some of the pre-protest rallies.

One can imagine the clear backpack directive will further embolden these survivors to speak out about the need for stricter gun safety measures across the U.S., as this change seems to ignore the important points students have been making about gun violence since the shooting.

It should not be easier to purchase a gun than it is to obtain a driver’s license, and military-grade weapons should not be accessible in civilian settings. You don’t drive a NASCAR on the street, no matter how fun it might be, just like you don’t need an AR-15 to protect yourself when walking home at night. No one does.

And one has to wonder what Runcie hopes to achieve with clear backpacks. Although the change will make it more difficult for students to conceal weapons in their backpacks, it doesn't prevent a student from waking onto campus with an AR-15 and killing students. The move seems extremely silly when you consider all the other things school officials could be advocating for — like stricter gun laws or a better safety action plan for what students and teachers can do if there's a threat on campus.

Not to mention, it doesn't seem fair that students at Douglas have to give up their right to privacy when they've already lost so much as it is. Why do students have to change their habits? Shouldn't the "need" for clear backpacks be an indication that laws need to change? Just some food for thought.

One can only hope that this clear backpack change draws greater attention to the fact that stakeholders need to do a better job when it comes to protecting students — as the Parkland shooting survivors aptly pointed out in their tweets, this idea just won't cut it.