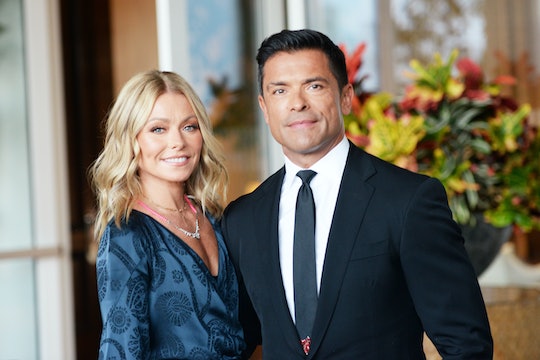 Well, you can't blame a gal for trying. When this talk-show host got to pay a visit to her BFF to welcome his new baby, it sparked fantasies of welcoming the stork all over again. The thing is, you need your partner on-board for that, and this star's other half isn't quite as excited about the prospect of a new baby as she seems to be. Mark Consuelos' reaction to Kelly Ripa saying she wants another baby wasn't all that shocking... so maybe Kelly better take up knitting or something. Because this is one idea that just isn't going to happen.

It all started when the host of ABC's Live with Kelly and Ryan got to pay a visit to fellow TV anchor Andy Cohen, who happens to be one of her besties, as InStyle reported. As Page Six reported, Cohen recently welcomed 2-month-old Benjamin, born via surrogate, which really got Ripa's baby fever pumping.

Cohen came on Live with Kelly and Ryan on Monday to explain more, according to another article from Page Six. "[The baby] is causing women all over my life to start re-ovulating,” Cohen joked. "I mean, Kelly came over, and her body was responding in ways … I was like, 'Whoa!' … I do have to calm the ladies down a little bit.'"

Kelly agreed that that heart-stopping rush when you cradle a precious new life like that totally put ideas in her head, according to PopSugar.

Baby Benjamin "really does make me want to have another baby. He’s confused me into thinking [I want another]," Ripa retorted, per InStyle.

"I was putting it out there for Instasuelos [Consuelos' Instagram handle] last night....He was like, 'It’s alright. Let’s be grateful for what we have.' And then he put on Game of Thrones and fell asleep, which was the anti-aphrodisiac," she added, as PopSugar reported.

Well, there goes that idea.

But, after all, as Us Weekly noted, Ripa and Consuelos have a pretty good thing going. After the two met on the set of the soap All My Children, they eloped to Las Vegas in 1996. They're now the proud parents of Michael, Lola, and Joaquin.

So you can see why Consuelos probably wasn't going to jump to it for an idea that would turn their lives upside down. The actor, who plays Riverdale's bad guy, Hiram Lodge, according to Good Housekeeping, must be happy to be at a point in his life where his kids are bigger and he can focus more on his career... and of course, his relationship with Ripa.

"We try to keep it positive," Consuelos told the magazine of his rapport with his spouse, who is famous for her witty social-media comebacks, in regards to her spouse and others. "When we say something, it's always in jest. We always have each other's backs. But we really don't dwell on the negative stuff."

As InStyle added, the pair, whose kids are now 21, 17, and 16, respectively, (the oldest, Michael, shot a cameo on Riverdale last year, which had fans comparing him to his hot dad, noted Good Housekeeping) have a combined net worth of nearly $150 million.

So it's not a matter of not having the resources to add a fourth child. Technically, sure, they maybe could. But do you think Ripa remembers the late nights... the early mornings... the exhaustion? I bet not. More than likely, this little whim of Ripa's will soon pass. I get it, but because my kids aren't that big yet, all I can think is: Kelly, enjoy your freedom! Go to the gym, don't look back!

Isn't it easier when it's not your own life to be dealing with?