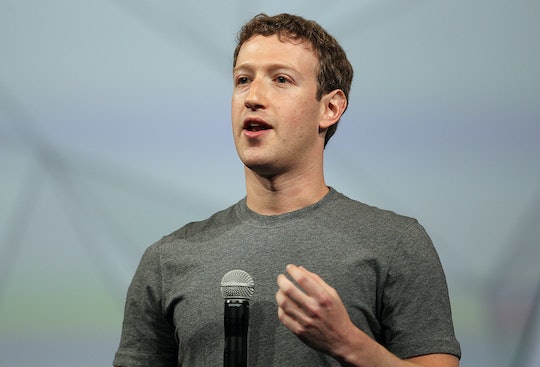 The father of Facebook seems to be delighting in his role of dad to daughter Max. On Dec. 8, Zuckerberg vaccinated his daughter, and posted the picture of the vaccination on Facebook. (Where else?) When he uploaded the picture of Max getting her vaccinations at six weeks old, he captioned the adorable photo, "Doctor's visit — time for vaccines!"

Zuckerberg — along with his wife, Priscilla Chan, a pediatrician, who live in Palo Alto, an area of California where residents are known for being against vaccinations — is sending a message to his legion followers. And that message is when enough people fail to administer vaccinations, outbreaks of preventable diseases like the measles and whopping cough are at risk of reaching epidemic proportions. In 2014, Newsweek reported that California has an alarmingly high number of unvaccinated children. In recent years, parents have chosen not to vaccinate for a variety of reasons — some religious, some personal — though most over concerns that vaccinating leads to autism, a theory that's been disproved by multiple studies.

But, thanks to Zuckerberg, whose post has been shared over 23,000 times at the time I'm writing this, parents will see the genius social networker standing behind the move to vaccinate. Is that an endorsement to vaccinate? No. But, Zuckerberg has a ton of sway.

This June a California bill was passed that requires all children entering private or public school to be vaccinated. According to the CDC, more than a quarter of California kindergarten classes have don't meet the 92 to 94 percent vaccination quota needed to "herd immunity," which makes epidemic levels of diseases like the measles and whopping cough a possibility.

So, given this news, plus Zuckerberg's high-profile pic that shows just how happy little Max is to be getting vaccinated (look at her face, people!) perhaps anti-vaxxers will reconsider their position.