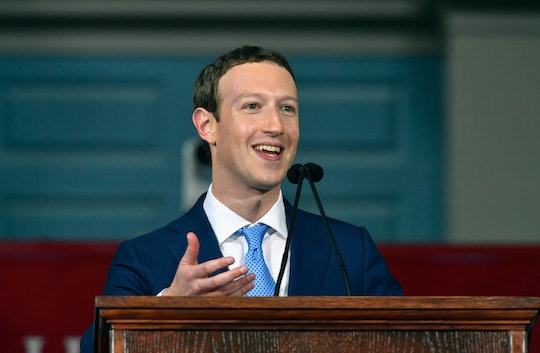 Facebook and its youthful CEO have certainly changed the way people communicate. Now, it looks like that's not the only innovation coming from Silicon Valley these days. The social media wunderkind might also be out to change the way your family does its chores, and Mark Zuckerberg's parenting hack will have you running to the kitchen to assess your kids' evening chore routine.

As People reported, the web boss, 35, and his wife, Dr. Priscilla Chang, juggle running the world with a busy family life that includes kids August, 20 months, and Max, 3. So it's completely understandable that a duo as busy as this one needs to streamline things. You have to admit, even if you'd never touch Facebook with a 10-foot pole, that this genius solution to the post-dinner cleanup crisis with kids is pretty much a lifesaver for anyone.

In the video, the two kids are seen, yes, rinsing the dishes at the sink and then loading them into the washer, with little August manning the sink courtesy of a safety step stool with railing. Watching this video fills me with a sense of parenting dread, as in, what's my excuse if Zuck's toddler and preschooler have kitchen clean-up absolutely dialed?

In the video, who appears to be Zuck's wife walks the kitchen in the background, as August washes the dishes in the sink, nicely secured in one of those little "toddler towers" similar to this. Max carefully loads silverware into the silverware tray. Chan (if it is her) adds a spoon to little August's workload, politely thanking her child in advance for the domestic help.

"Parenting milestone unlocked," Zuckerberg wrote along with the video, with 105,000 likes to accompany the montage.

Wow. Pretty impressive stuff considering that the Facebook CEO could employ an army of servants to do the dishes, not to mention cater to his one of his kids' wishes night and day.

But even amid concerns over whether Facebook is a societal good, or a digital version of Frankenstein's monster (I guess with Zuckerberg as mad inventor Dr. Frankenstein), Zuckerberg has certainly never changed his tune when it comes to parenting.

As Fast Company reported, the tech innovator released an open letter upon the birth of Max, now turning four at year's end, pledging that he and Chan would give 99 percent of their Facebook shares — roughly $45 billion at the time — to advance human potential and equality in their daughter's lifetime.

In addition, Zuckerberg announced recently he built a "Sleep Box" to help his wife get her shut-eye, with the device releasing a low light in the 6 a.m. range, as Yahoo! News reported.

So, in other words, you don't have to love Zuckerberg as a world player to benefit from the fact that as a parent and family man, he's really got game.

I'm taking a cue from him tonight and shoving my kids right at the sink, using whatever chair or step stool is around. I'm glad I saw this video, but it shouldn't take a tech guru to make me enforce better teamwork at my house. Now we know that even very young kids can be extremely helpful. Who's with me?