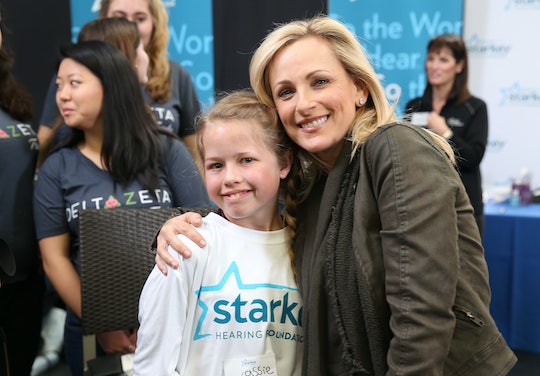 Marlee Matlin Signs National Anthem At Super Bowl, Not That You Really Saw It

While Lady Gaga sang the national anthem Sunday night just prior to kickoff for Super Bowl 50, actress and activist Marlee Matlin signed the National Anthem for the crowd. But, strangely enough, she was barely shown by cameras. This is the third time that Matlin signed for the Super Bowl, which is super cool, but it just would've been nice to see more of her. Because she was, you know, signing for people unable to hear the anthem.

Matlin appeared in the TV series Switched at Birth, but she is also well known for her role in The L Word. Matlin lost most of her hearing when she was 18 months old, according to IMDb. Matlin participates in a number of volunteer and service activities, but, most notably, she was instrumental in passing legislation that requires all televisions made in the U.S. to be equipped with Closed Caption technology for deaf people, according to Look to the Stars.

Matlin also signed the "Star Spangled Banner" before Super Bowl XLI in Miami, which was between the Indianapolis Colts and Chicago Bears, according to Hollywood Life. Additionally, Taste of Country reported that she signed the national anthem in 1993 when Garth Brooks took the stage. Often, at major sporting events, the person signing the national anthem will be shown in the corner of the screen, so that deaf people can follow along easily. But that didn't happen during Super Bowl 50, and many Twitter users thought that briefly flashing Matlin while she signed was an empty gesture to include the deaf on behalf of CBS. CBS did not immediately respond to Romper's request for comment.

When sports writer Will Leitch retweeted Pat Keirnan's point, Twitter users pointed out that the person who signs the national anthem is there for deaf people who are in the stadium. But Leitch, who was at Super Bowl 50, said that Matlin wasn't even shown on the jumbotron — only Gaga was. So, if Matlin wasn't shown on the jumbotron for people in the stadium who were deaf, and if she also wasn't shown on CBS on TVs in people's homes, then who was she there for? Like Keirnan pointed out, the people in the stadium wouldn't be able to see what Matlin is doing with her hands from 300 yards away. Matlin shared a video Sunday night that showed one almost all of her performance in the corner of one of the jumbotrons.

Activists for the deaf across the country tweeted that they felt her presence at the Super Bowl was poorly done and that it almost seemed like an obligatory move by CBS.

If people in the stadium can't actually see the person signing the national anthem because of how far away they are, then it's pretty clear that the signer is there for the people watching on TV. It seems like an empty statement to even have someone there signing the national anthem if they aren't going to be shown on TV, and the deaf community certainly took notice.