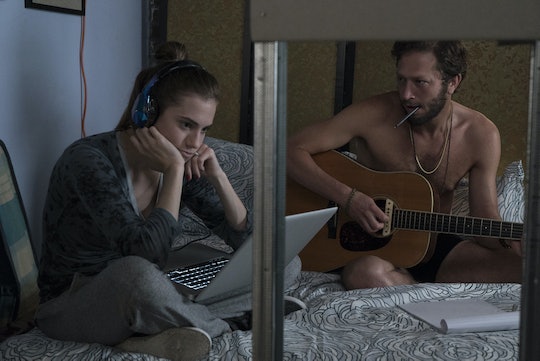 Marnie Broke Up With Desi On 'Girls,' & Twitter Is Not Sad

Like all of the main characters on Girls, Marnie has jumped from one bad decision to the next in her effort to figure out where she fits in the world. Marnie started off very Type A, but as her life plan took some major hits, she decided to become a singer, which is how she got involved with one of the most annoying characters on the show, Desi. The two got married in the season premiere, but by the end of Sunday's episode, "The Panic in Central Park," Marnie and Desi broke up. And the fans? They aren't sad about it.

Marnie is a character that's difficult to be sympathetic to at the best of times. She's utterly lacking in self awareness and coming from a place of privilege that not everyone can identify with. Desi has managed to bring out her worst qualities (self-delusion and pretentiousness) while at the same time being a major pill all on his own. Many characters have earned the moniker of The Worst throughout the history of television, but Desi might be the worst of the worst.

Desi and Marnie started off in a bad place and only got worse from there. He had a girlfriend who he was cheating on with Marnie, then as soon as she started to pull away from him, he popped the question and reeled her in once more. It came out during the wedding episode that Desi had been engaged many times before, cementing him as the kind of guy who seeks commitment to distract from a faltering relationship. However, none of those girls had made the bad decision to take a walk down the aisle until Marnie.

Marnie has always chased after excitement, to an extent (her relationship with that creepy artist, for a start), and tonight's episode proved it. A fight with Desi sent her back into the arms of ex-boyfriend Charlie, her messiest and probably most important ex. They had a crazy night out filled with mishaps: fake identities, drugs, prostitution, Central Park lake diving, and a mugging (and that's not even all of it). Marnie comes out of it with a little more clarity than she had before: she still doesn't know who she is, but she knows that she definitely doesn't want to be anywhere near Desi anymore.

Fans had been waiting to hear that and they went in on Twitter celebrating Marnie finally getting free of the jerk dragging her down.

I don't know where Marnie is going from here, but anything will be better than where she's coming from. It seems like Twitter agrees.